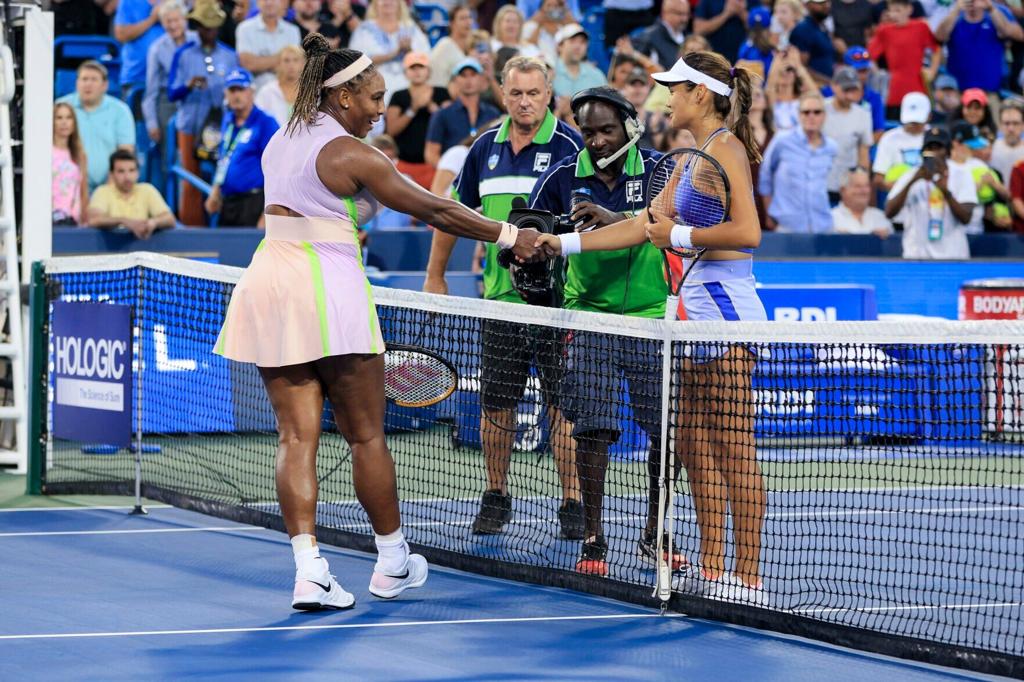 Serena Williams lost in the opening-round match of the penultimate tournament of her career Tuesday, but was still given a hero’s send-off following the 6-4, 6-0 defeat to Emma Raducanu at the Western & Southern Open.

Moments after losing, the 2021 US Open champion was given a standing ovation from the crowd and drew praise from her adversary on the court after the match.

“We all should honor Serena and her amazing career,” Raducanu said. “I’m so grateful for the experience to have been able to play her and for our careers to have crossed over. Everything she’s achieved is so inspirational. It was a true honor to share the court with her.”

Williams, for her part, appeared to decline the on-court interviewer as she quickly packed her bags and walked off the court immediately after the match, waving and smiling to the crowd as she went. A microphone that had been set up on the opposite side of the net from Raducanu’s interview was then removed from the court.

It’s been an emotional week for Williams. The 40-year-old announced she would soon be walking away from tennis in a first-person essay for Vogue published last Tuesday, sharing her desire to have another child.

Williams, who has the most major titles of any player in the Open Era with 23, has admitted to having mixed feelings regarding retirement — even opting to use the word “evolution” about her next chapter instead.

“There is no happiness in this topic for me,” Williams wrote. “I know it’s not the usual thing to say, but I feel a great deal of pain. It’s the hardest thing that I could ever imagine. I hate it.

“I hate that I have to be at this crossroads. I keep saying to myself, I wish it could be easy for me, but it’s not. I’m torn: I don’t want it to be over, but at the same time I’m ready for what’s next.”

Since her reveal, Williams received much fanfare in her second-round loss at the Canadian Open, in which there was an on-court ceremony following the match, and ticket sales skyrocketed at the Western & Southern Open and the US Open.

Williams’ afternoon practice session on Tuesday drew hundreds of fans cramming to catch a glimpse of the star.

It was a near-capacity crowd at the 11,435-seat Center Court on Tuesday, and there were chants heard and visible signs in support of Williams until the final point. In addition to her family, including four-year-old daughter Olympia, in the crowd, four-time major champion Naomi Osaka, who lost earlier in the day, was also in attendance.

Williams struggled early in her first career meeting with Raducanu, 19, and trailed 4-1 before fighting back and winning three of the next four games. But the second set was all Raducanu, who will next face two-time major champion Victoria Azarenka, and she closed out the match in 65 minutes.

“I think that the crowd was pretty electric,” Raducanu said in her postmatch news conference. “The stadium was really packed. Even if they were cheering for Serena … I was prepared for that.

“You know, to play the greatest in her home country in a stadium like that, I knew, and I was all for it. You know, if she’s maybe going to stop playing soon, then 100% go cheer ahead.”

Williams is expected to play in her final tournament at the US Open, which starts in New York on Aug. 29. She is a six-time champion at the event, and reached the semifinals in her last appearance in 2020. She reached the final in 2018 and 2019.