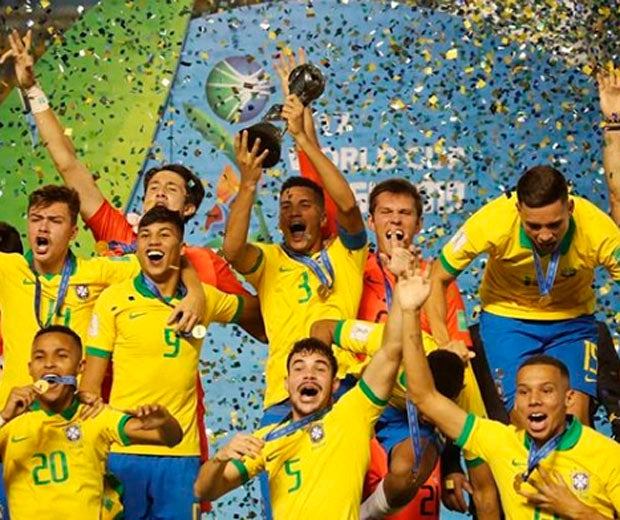 Brazil rallied to defeat Mexico 2-1 on Sunday to conquer its fourth under-17 World Cup title.

A Seleção created plenty of quality goalscoring chances, but their finishing let them down as the back of the net eluded them for much of the evening. Veron and Kaio Jorge each saw first-half shots narrowly miss the target, while Peglow pinged the crossbar from outside the box in the 17th minute.

To the dismay of many in presence, Mexico took the lead in the 66th minute. Then Daniel Cabral imitated Peglow in the 81st minute, watching his shot attempt rebound off the top of the bar. At last Veron won a penalty when Alejandro Gomez slid into him in the box, and Kaio Jorge coolly drew Brazil even in the 84th minute from the spot. Then, reprising his role from the semi-final, Lazaro unleashed a full volley from Yan Couto’s cross the beat Mexico goalkeeper Edu Garcia with mere seconds left.

The Concacaf champions did well to take waves of pressure in the opening period, holding Brazil scoreless despite a handful of promising opportunities.

As time wore on they began to take control of the ball and threaten themselves, with Israel Luna and Santiago Munoz the chief creators. But it was captain Eugenio Pizzuto and No11 Bryan Gonzalez who linked up to put El Tri ahead near the halfway point of the second half.

Gonzalez leapt to meet Pizzuto’s cross and headed the ball toward the far post, beating the diving Matheus Donelli to open the scoring. But Gomez conceding a penalty left Mexico vulnerable to the Brazilian attacking onslaught.

Holding out a few more seconds would have seen the final go to penalties, but instead Mexico missed out on earning a third U-17 trophy. Brazil reached the final after overcoming a two-goal deficit to defeat tournament favorite France 3-2, and had to come back again to capture the under-17 title for the first time since 2003.

The Brazilians didn’t initially qualify for the tournament after a poor performance in the South American qualifiers, but problems in the organization in Peru led soccer’s international governing body to move it to Brazil, allowing the team a spot as hosts.