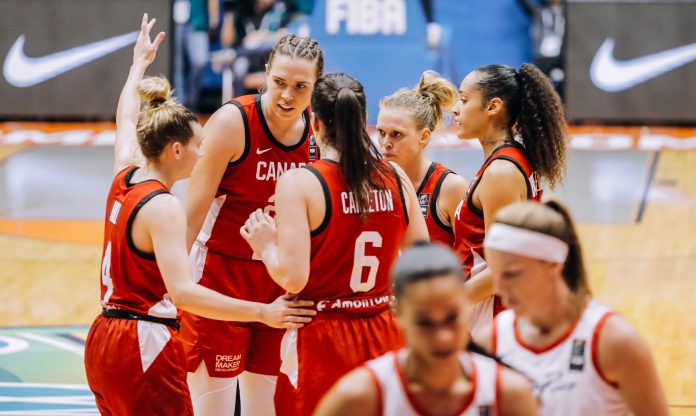 Canada’s women’s basketball team put its depth on display Sunday in a authoritarian 110-60 victory over the Dominican Republic in the final match of the FIBA Olympic pre-qualifying tournament.

All 12 players hit the scoresheet, including six in double digits, to help the Canadians conclude 3-0 at the tournament and advance to the next Olympic qualifier in February.

“We got to roll our whole lineups through, and it was fun when we got going,” said Canada’s coach Lisa Thomaidis. “It was nice to see different lineup contributing and building chemistry.

“It’s exciting, the ones who have just kind of come on to the scene the last couple years and been part of this quad and will be part of the next one. It’s great to see that pipeline of talent that continues to funnel into this program.”

Cheisy Hernandez led the Dominican Republic with 23 points and Geocelis Reynoso had 13. The Dominicans ended the tournament 0-3.

Canada outscored the Dominican Republic 50-28 in the paint and scored 37 points off turnovers. Canada’s bench provided 59 points in the victory.

Canada’s defence was also solid, forcing 29 turnovers and 20 steals. “I think we can be even more aggressive,” said Thomaidis. “We have the athletes to back it up and we can be more disruptive and opportunistic when it arises. That’s something we’ve always held our hat on, and we can be proud of that today.

“We weren’t complacent at all. We had some things to improve upon last night and it was a good motivator for us. We showed what we’re capable of today.”