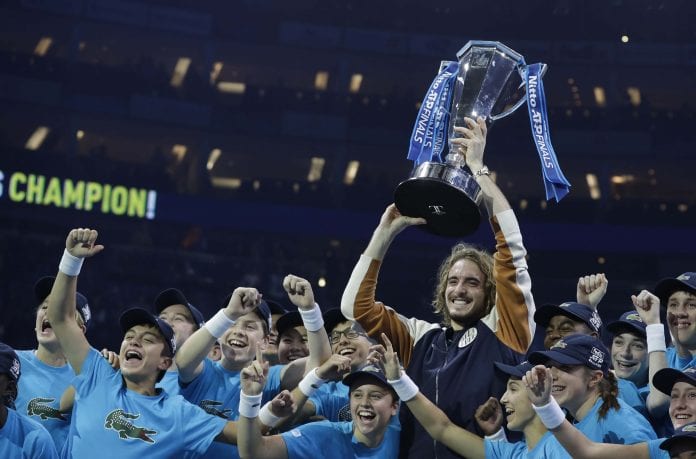 Three years after coming to the ATP Finals as a hitting partner to the top pros, Stefanos Tsitsipas is leaving the tournament as champion.

Tsitsipas rallied to defeat Dominic Thiem 6-7 (6), 6-2, 7-6 (4) on Sunday for the biggest title of his career, becoming the youngest champion at the season-ending event in 18 years.

”I remember myself watching this event on TV and thinking, ‘Oh, these guys have done an insane year to be playing here,”’ said the 21-year-old Tsitsipas, who was making his first appearance at the tournament. ”And now I’m in the position to be champion, so it feels awesome.” It’s been quite a journey for Tsitsipas, who first met Thiem at the O2 Arena in 2016 when he was the world’s top-ranked junior and was invited to be a hitting partner for the ATP Finals participants.

”That is unbelievable,” Tsitsipas said when reminded of that day. ”I just remembered (that), first time I met Dominic was I came here as a sparring partner. I think my first hit was with Dominic. It’s unbelievable, isn’t it? We are now facing each other in the final.”

The victory caps a breakthrough season for Tsitsipas, who reached the semifinals of the Australian Open, won two ATP titles and became the first Greek man to break into the top 10.

He also leaves London with $2.6 million in prize money for this victory and joins a group of young players – including last year’s ATP Finals champion Alexander Zverev and U.S. Open runner-up Daniil Medvedev – who are seen as the top up-and-coming talents and challengers to the sport’s Big Three of Roger Federer, Novak Djokovic and Rafael Nadal.

It is the fourth year in a row that there is a first-time champion at the ATP Finals, following wins by Andy Murray in 2016, Gregor Dimitrov in 2017 and Alexander Zverev last year.