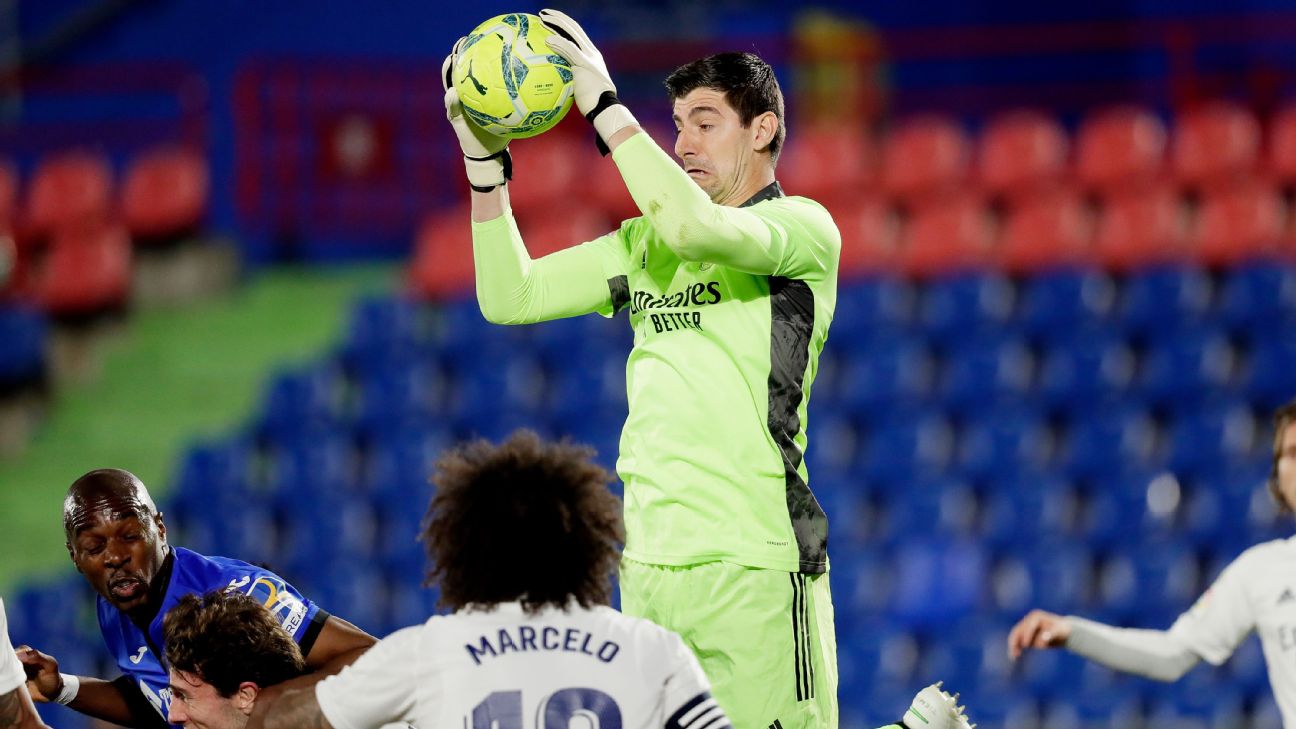 A heavily depleted Real Madrid side scraped a 0-0 draw at Getafe on Sunday in La Liga to fall three points behind leaders Atletico Madrid.

Real defeated Barcelona 2-1 last week and overcame Liverpool in midweek to reach the Champions League semifinals but were crippled by the absence of nine players due to either injury, suspension or COVID-19 positives.

Forward Mariano had an early goal ruled out for offside after a VAR review but Getafe had far more and far better chances, hitting the woodwork in the first half and being thwarted by two fine saves from Thibaut Courtois in the second.

The draw interrupted a run of four straight league wins for Zinedine Zidane’s side and left them second on 67 points after 31 games, three behind leaders Atletico who thrashed Eibar 5-0 earlier in the day.

“We knew what it would be like here, the pitch was very dry and we couldn’t get the ball moving quickly. We have hardly any time to rest but we have to keep on giving everything, that’s what football is like right now.”

Despite the many absences, Zidane opted to start without top scorer Karim Benzema and left Toni Kroos on the bench, handing a first start to defender Victor Chust and a debut for 20-year-old midfielder Antonio Blanco from the bench.

Getafe could have scored three times in the first 10 minutes and then striker Jaime Mata struck the post with a header.

Real’s Mariano saw a shot cleared off the line from David Timor, adding to his frustration after his goal was chalked off for a fractional offside.

The home side continued to dictate the play after the interval as Real grew ever more tired but Getafe could not get past Real keeper Courtois.

“You focus on one word,” said Zidane after the match. “We don’t have limits. We’ll do something. We’ll keep fighting, whatever happens, until the end of the season, we’ll raise the limit, there’s no ceiling for this team. Our morale is good, we have to rest well and keep going.”

The Belgian flew towards the top corner to beat away a shot from Angel Rodriguez and then reacted quickly to tip a long range effort from Nemanja Maksimovic over the bar after it took a deflection off Chust.

Getafe had two penalty appeals waved away for incidents involving Real centre back Eder Militao, who brought down Enes Unal in the first half and then collided with Angel just as the forward was getting his shot away.