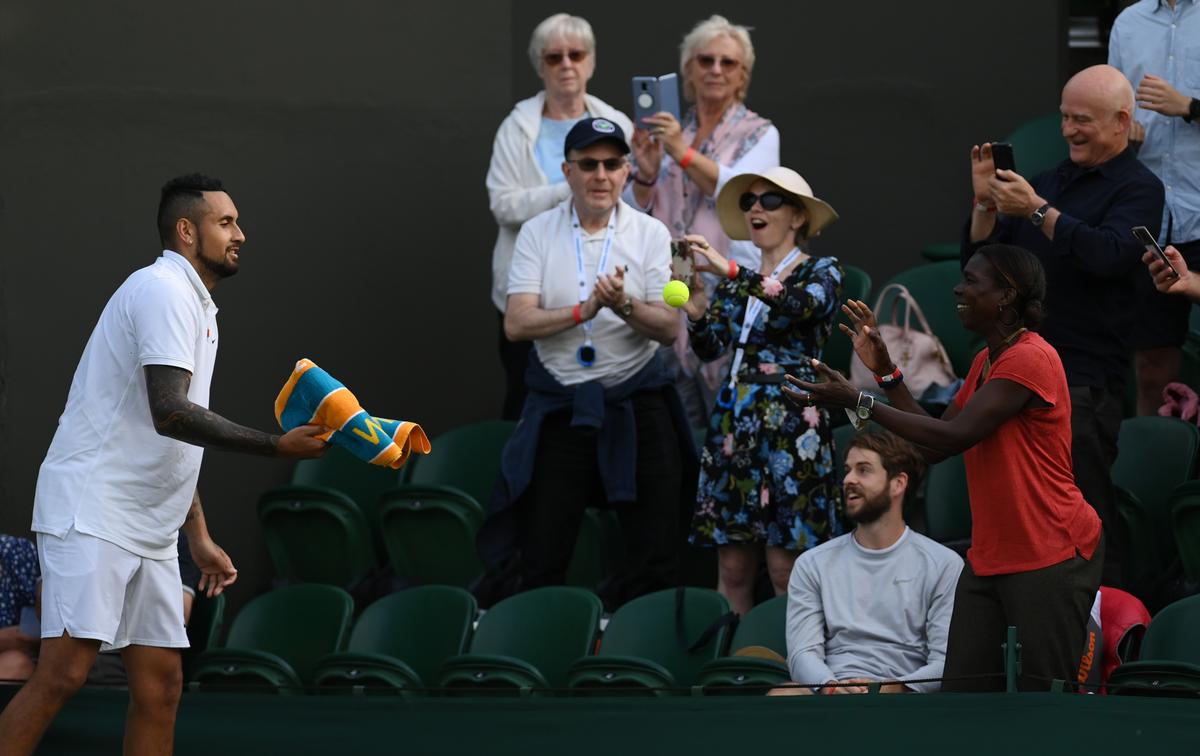 The extraordinary Nick Kyrgios show is rolling on with smiles and a serving masterclass as the Australian “holidaymaker”enjoyed his second Wimbledon victory in two days.

Kyrgios, who reckoned he was suffering physically from his draining first round win over Ugo Humbert on Wednesday, didn’t look it as he returned 24 hours later to blow away a spirited challenge from the excellent Italian Gianluca Mager 7-6 (9-7) 6-4 6-4.

It was a victory which came with plenty of laughs and smiles – from both the player and his adoring fan club on Court No.3 – as well as an obscenity, for which Kyrgios was instantly forgiven a he apologized profusely.

He even appeared to discover a new coach as he enjoyed great rapport with a fan sitting at courtside who offered him some sage advice.

Taking crowd interaction to a new level, he’d asked where everyone thought he should hit his next serve and his new mentor shouted back, “Down the middle!”.

So he did – and instantly served an ace.

“Good call!” he responded, turning and pointing at his new guru whose reward at the end of the match was to have a match ball gifted to her by Kyrgios.

Even his first set four-letter outburst after he’d blown a point, which saw him earn a code violation, was laughed off when he said sorry.

And when disputing – fairly good-naturedly – a foot fault awarded against him, he finished off his argument with the official by booming down another ace.

Everyone could see he was in the mood from the moment in the opening game when he delivered a hapless underarm serve.

It got better, of course, as he pounded down 29 aces and didn’t give up a single break point in one hour 51 minutes.

Mager was excellent but once he’d blown a 5-2 lead in the opening set tiebreak, Kyrgios was unstoppable, particularly with his running commentary as he chuntered away about how the court was as slow as the Roland Garros clay.

“Make it real grass!” he cried.

Once again, it was impossible not to marvel at how a man playing his first event since February who’d arrived four days before Wimbledon could produce such amazing shotmaking, like the impossible running drop shot played on the retreat miles behind the baseline.

Then there was the moment he chased down a drop shot with the cry that “I haven’t stretched that much in six months!”

Early days, of course, but what makes him seem so dangerous this year is that he genuinely looks and sounds as if nothing can get under his skin while he’s putting on his unique act.

“I feel like when they come to my matches now, they know how I am,”he said.

“I’m quite lighthearted. Yeah, they know it’s a bit of a show. They just want entertainment.

“I have people in the front row literally coaching me, like literally telling me, ‘That’s all right, good ball, great return, it will work next time, good depth’. I’m like, ‘Dude, what is going on out here?’

“I just feel like I don’t put as much pressure on myself anymore. When I was younger, it was hard to deal with all the criticism that everyone gave me. Like, it beat me down to a point of very bad depression.

“Like, I wasn’t even coming to Wimbledon and enjoying myself. I was not embracing this amazing event.

“Now I just enjoy it when I’m out there. I breathe in the fresh air.”

His next rival will be Felix Auger-Aliassime, a four-set victor over Swede Mikael Ymer, but even the brilliant young Canadian can only ever be an extra in this show.

Sergio Ramos and PSG in advanced negotiations over free transfer