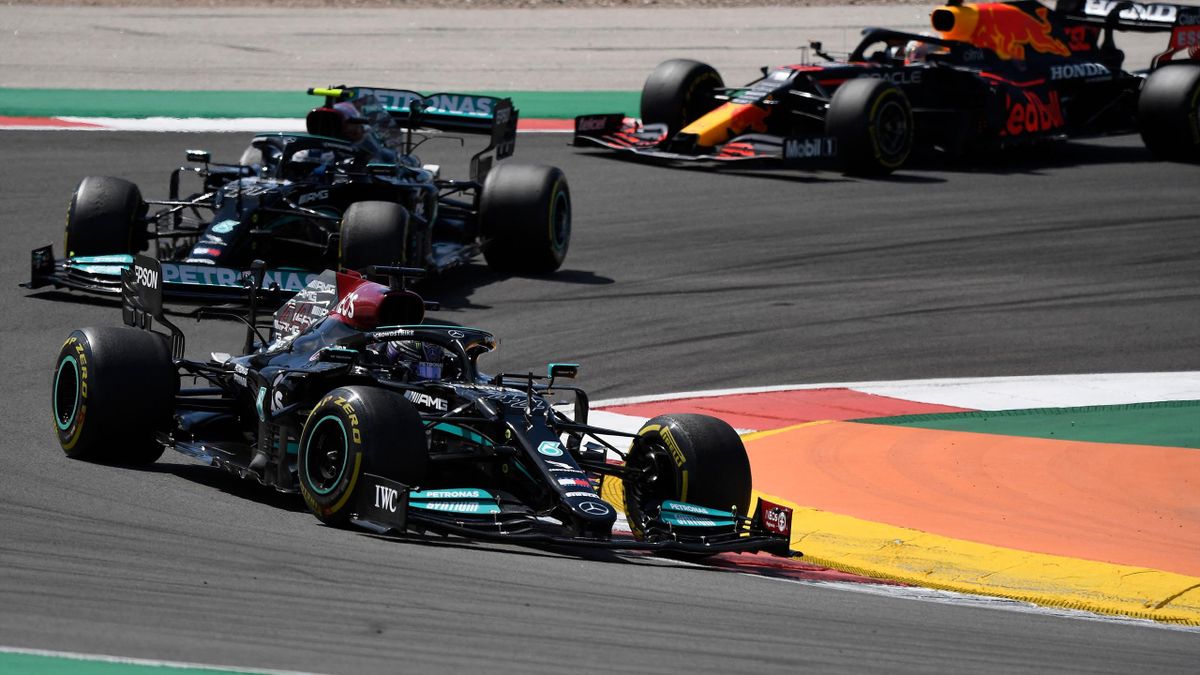 Lewis Hamilton fought back to pass both Valtteri Bottas and Max Verstappen for a brilliant triumph in the Portuguese Grand Prix.

The seven-time champion fell to third as Verstappen’s Red Bull overtook him at a restart after an early safety car.

But he passed Verstappen four laps later and then hunted down and did the same to his Mercedes team-mate before moving on to control the race.

The victory gives Hamilton an eight-point championship lead over Verstappen.

It was a statement race for Hamilton, who has moved on to 97 career Grand Prix victories, and a clear demonstration of his unquenched desire to secure a world record eighth world title this year.

But he missed out on the point for fastest lap after both Verstappen and Bottas pitted for fresh tyres to chase it in the closing laps.

The Dutchman, bidding to minimize the damage in his fight with Hamilton for the title, thought he had taken it – although his time was deleted for going beyond track limits, and so the point went to Bottas instead.

Hamilton lost out to Bottas in the fight for pole position on Saturday by just 0.007 seconds and the two Mercedes, with Verstappen behind, moved away in formation at the start.

But a safety car was triggered on lap two when Kimi Raikkonen drove into the back of Alfa Romeo team-mate Antonio Giovinazzi on the pit straight and tore off his front wing.

At the restart, Bottas waited until he was halfway around the final corner before accelerating away and Verstappen anticipated the situation perfectly, sweeping past Hamilton in a superlative move around the outside of Turn One.

Verstappen stayed right behind Bottas but could not pass him and was soon under pressure from Hamilton, determined to repay the compliment.

At the end of lap 10, Verstappen had a slide on the exit of Turn 14, the effective final corner, and Hamilton grabbed his opportunity, closing on the Red Bull and repassing Verstappen.

The Dutchman defended to the inside, but Hamilton squeezed alongside him there anyway over the dusty part of the track to claim the corner.

Next, it was Bottas’ turn to fall prey to Hamilton, who tracked his team-mate closely for nine laps before pulling off a lovely outside pass at Turn One.

The race was now Hamilton’s to lose, and he was always in control, as the focus turned to the fight for second between Bottas and Verstappen.

The decisive moments came around the pit stops.

Red Bull brought Verstappen in first on lap 35, with Bottas following him in a lap later.

The Mercedes kept the lead, but Verstappen was close behind the Finn as he came out of the pits, and Bottas’ fate was sealed when he had huge slide on the exit of Turn Three. Verstappen closed right up and passed into the hairpin at Turn Five.

Bottas dropped three seconds back from the Red Bull before coming back for a few laps, but then fell away again as the top three positions were sealed.