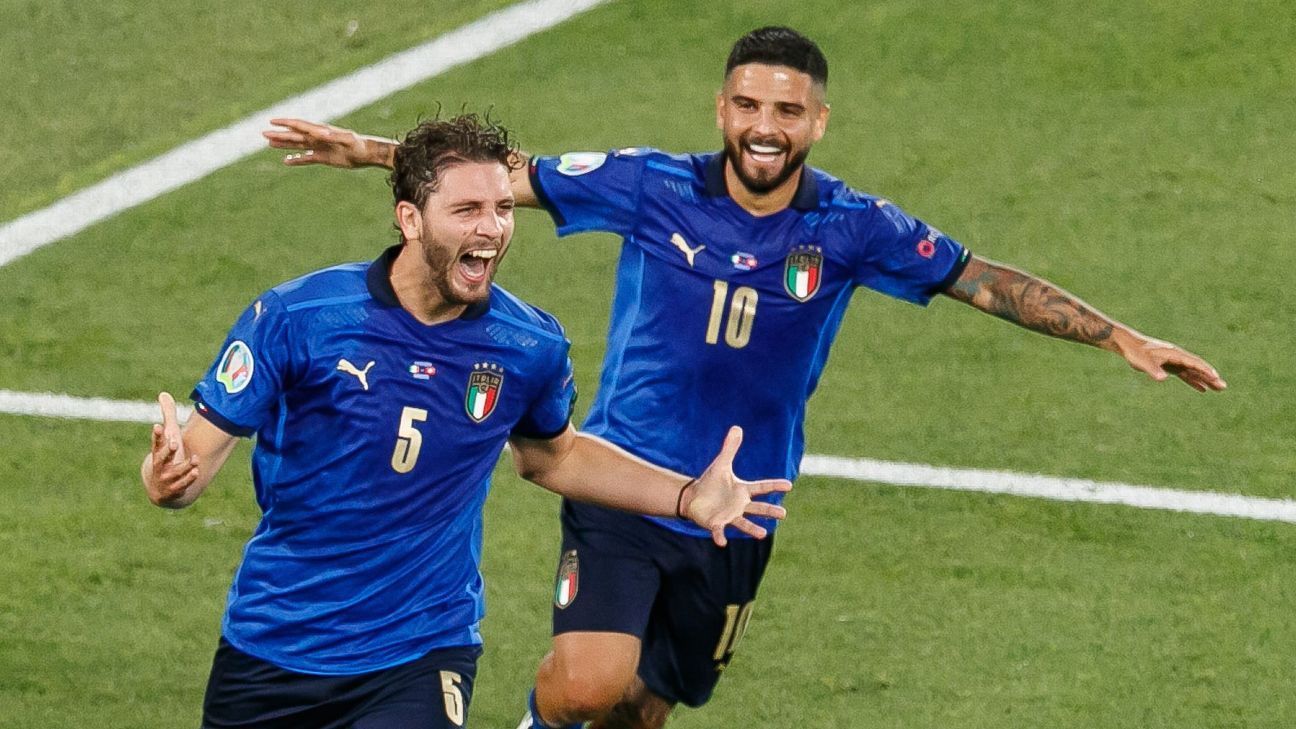 After defeating Switzerland 3-0 in Rome on Wednesday night, Roberto Mancini’s men are the first to book their place in the knockout rounds of Euro 2020 but they are already looking like a team who trust they can go an awful lot further than that.

This may not be a group packed with the superstars boasted by major tournament squads of the past but they are, crucially, a team. And a confident, well-drilled one at that.

While lots of the money has gone on France, Belgium or England to lift the trophy at Wembley on July 11, Italy’s odds are steadily shortening.

They play Wales at Stadio Olimpico on Sunday to resolve who finishes top of Group A ahead of a possible last-16 tie versus Austria or Ukraine and then a blockbuster quarterfinal with in all likelihood Belgium. By then Marco Verratti should have recovered from injury but Italy have been so impressive in their opening two games that the talismanic Paris Saint-Germain midfielder has barely been missed.

Mancini’s only concern at the moment is the injury that forced off captain Giorgio Chiellini early on versus Switzerland, although the 36-year-old’s hamstring problem was not severe enough to keep him from leaping up from the bench to celebrate Manuel Locatelli’s fabulously worked opening goal midway through the first half. Locatelli’s second of the night, a fierce left-foot rocket drilled into the corner of the net from the edge of the penalty area, was just as good and Ciro Immobile’s late third was the icing on the cake.

There is a swagger about the Azzurri that should worry everyone else.

“Switzerland are a strong side, we knew it would be a tough game and it was,” said Mancini afterwards. “We created several chances and we deserved the victory. We were struggling in the opening minutes, but then we pressed them high and forced them to make mistakes. They did really well, it wasn’t easy, their second game in five days and it’s so hot.”

With such limited time together, it can be hard for international teams to function as a unit but Mancini has made it look easy since taking the job in May 2018 in the wake of a disastrous World Cup qualifying campaign that ended in failure to make the tournament in Russia.

Mancini has already been given a contract extension until 2026, but if his team keeps playing like this he might have a job for life by the end of the summer.

The former Internazionale and Manchester City manager has got Italy defending like Italy and attacking with all the flair he had as a player. It is a frightening combination.

Victory over Switzerland, as comfortable as the scoreline suggests, was their 10th in a row while also extending an incredible undefeated run under Mancini that stretches back to September 2018. The last goal they conceded was in October 2020 and judging by the way they defended in Rome, it was easy to see why.

The one time Switzerland broke through Steven Zuber saw his effort expertly saved by Gianluigi Donnarumma. The game was already won when the ball bounced up invitingly for Xherdan Shaqiri to whip in a consolation goal but the Liverpool forward was still met with a wave of blue shirts that crashed around him.

The statistics speak for themselves.

Only France in 1984 and Germany in 1996 have started a European Championship with consecutive wins by at least a two-goal margin without conceding, and both teams went on to win. Italy’s class of 2021 have every chance of joining them.