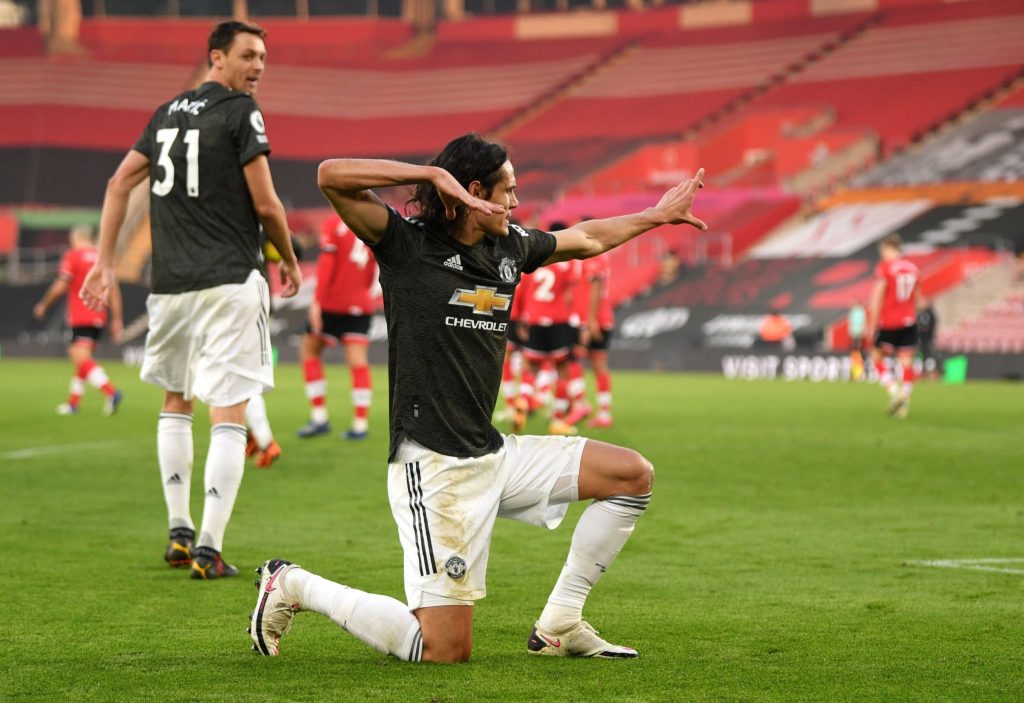 Substitute Edinson Cavani inspired Manchester United to come back from two goals down and win 3-2 at Southampton on Sunday, scoring two goals and creating another.

Southampton led 2-0 at half-time through goals from Jan Bednarek and James Ward-Prowse but a Bruno Fernandes strike and Cavani double won the match for the visitors.

United goalkeeper David de Gea limped off at half-time after suffering a knee injury when attempting to save Southampton’s second goal.

United became the first side in Premier League history to come from behind to win four successive away matches and they had Cavani to thank for the dramatic turnaround on the south coast.

Ole Gunnar Solskjaer’s men moved into the top half of the table with the win, up to seventh on 16 points, one point behind Southampton, who saw their seven-match unbeaten league run brought to an end.

United started brightly and almost took the lead inside the opening minutes but Mason Greenwood missed the target after rounding the goalkeeper.

However, it was Southampton who broke the deadlock when Bednarek headed home from Ward-Prowse’s corner.

Both teams had opportunities to score afterwards when Kyle Walker-Peters’ strike hit the post and Alex McCarthy produced a fine double save to deny Greenwood and Fernandes.

The hosts doubled their lead after 33 minutes when Ward-Prowse scored a fantastic free kick which saw De Gea’s knee strike the post in his attempt to save it.

Cavani replaced Greenwood in the second half and set up Fernandes to score on the hour mark to get United back in the game.

Fernandes returned the favor 14 minutes when his shot was turned into the back of the net by a Cavani header. United dominated the latter stages, and the 33-year-old Cavani struck again in stoppage time, his near-post header from Marcus Rashford’s cross earning all three points.

“Great impact of course,” United manager Ole Gunnar Solskjaer stated of Cavani. “He is always on the move, he wants to get in front of you and I am very pleased with him.