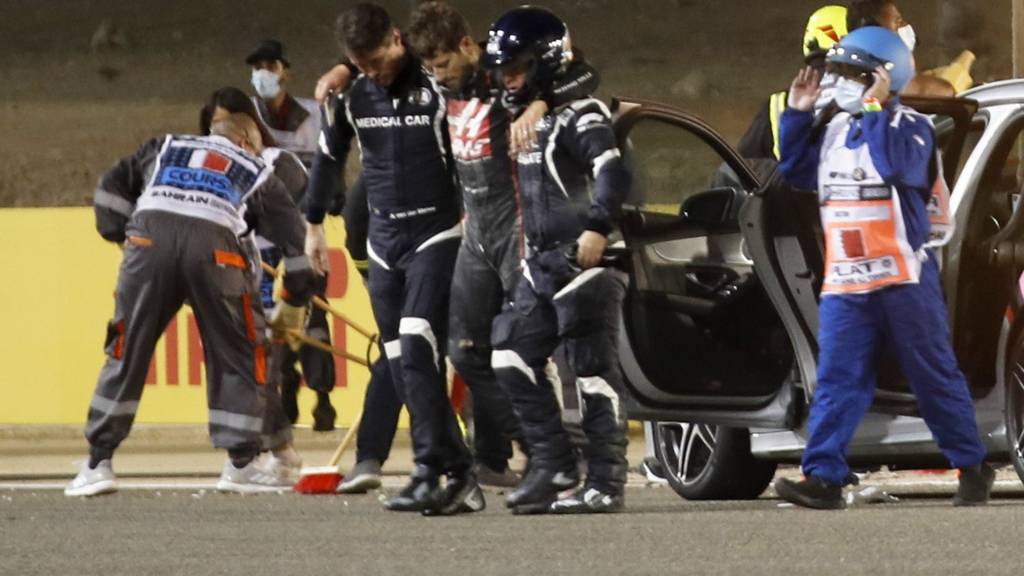 Lewis Hamilton claimed a routine victory at the Bahrain Grand Prix, where Haas driver Romain Grosjean limped away from a huge crash which saw his car catch fire and split in two.

Grosjean’s car was pitched into a barrier on the opening lap after contact with AlphaTauri’s Daniil Kvyat. The head-on impact tore the Haas car it in two and engulfed the cockpit portion in flames.

Grosjean was in the flames for around 10 seconds before climbing out and being helped away from danger by the FIA medical team which follows the pack on the first lap. Grosjean had to be helped to the medical car before being taken to the medical centre. Haas told media the driver has at least one suspected broken rib.

The crash prompted the race to be halted and it did not continue for over an hour.

When it did, Lance Stroll’s Racing Point was flipped upside down in another incident involving Kvyat. Stroll was unhurt and his car was quickly cleared away to safety, meaning a second red flag was not needed.

The race resumed after a short spell behind the Safety Car.

As he had at the previous two starts, Hamilton held the lead at the start and controlled the event from that point on. The Mercedes driver, who wrapped up his seventh world championship at the last race in Turkey, now has 95 F1 race triumphs.

Perez had looked set to beat Albon, the man he has been tipped to replace at Red Bull next campaign, until the engine failure. It was a huge blow to Racing Point in its fight with McLaren and Renault for third position in the championship.  The race finished behind the Safety Car, as Perez’s car took a few laps to clear from the side of the race track.

McLaren’s Lando Norris and Carlos Sainz moved up a position as a result, finishing fourth and fifth and claiming a haul of 22 points for the team, moving it 17 points clear of Racing Point and into third position in the championship.