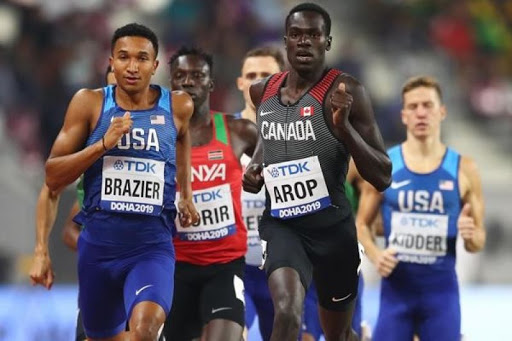 Chris Woods marvels at Marco Arop’s growth as a middle-distance runner. His buy-in of increased aerobic training last fall leading to more steady performances on the track. His ability to stay calm on the biggest of stages. And his appreciation of every chance to practice and race.

Arop’s coach from his days racing at Mississippi State University and since turning pro in December 2019, Woods thinks he isn’t far off the Canadian record in the men’s 800 metres and in contention to win an Olympic medal.

“As a coach and mentor who has seen him grow up these last three and a half, four years, it’s been amazing,” Woods told CBC Sports over the phone this week. “He has not even scraped the surface of his abilities.”

Arop will compete for the final time before his Olympic debut in Tokyo later this month at a Diamond League meet Friday in Monaco after setting a personal-best time of one minute 44 seconds in Stockholm on Sunday.

Arop is confident of a fast time in Monaco, where he set his previous PB of 1:44.14 last Aug. 14, feeling Friday could be the “perfect race” leading into Tokyo with the right pace.

The Edmonton native. who has only run seriously for six years, noted he wasn’t aggressive early in the first of two laps in Sweden and should have put more weight on his big toes to run more efficiently and hold form. He also admitted to easing the pace after pulling away from his opponents about 200 meters from the finish line, a move Arop discussed before the race with Woods.

“I can’t fall asleep at any point. If I commit to a pace I have to maintain or go faster,” the six-foot-four Arop said. “It’s easier to maintain a certain speed than to slow down and try to pick it up at the end.”

Kenya’s Ferguson Cheruiyot Rotich, the world’s No. 2-ranked runner in the 800, passed Arop down the final stretch for the victory in a 2021 world-leading time of 1:43:84. “With 150 to 200 metres left,” said Woods, “you have to view it as a new race and be able to find those gears to hold off everybody and finish strong.”