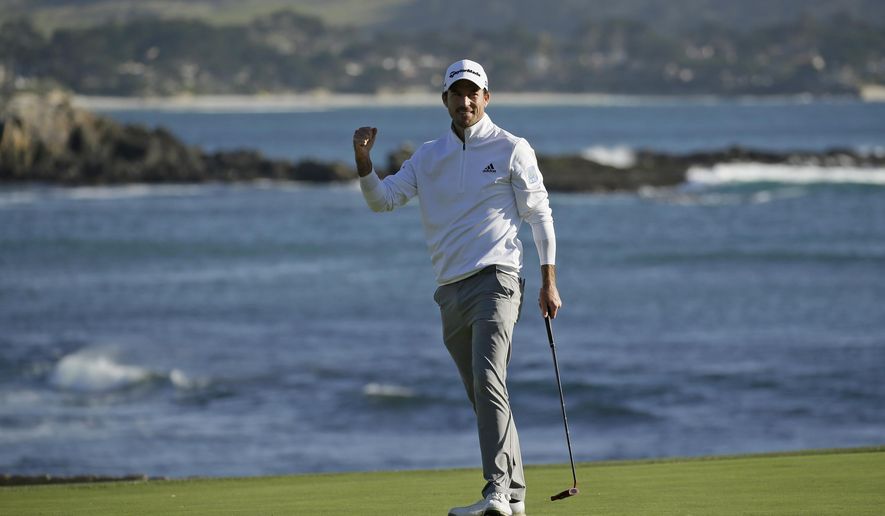 On Father’s Day last year, Nick Taylor posted on Instagram that he and his wife Andie were expecting their first child.

Charlie Wells Taylor was born on Oct. 24 and was there in his mother’s arms to help celebrate Taylor’s second PGA Tour win, which came Sunday at the AT&T Pebble Beach Pro-Am.

Funny how things work out sometimes. “It was super special,” Taylor said of the celebration he had with his family at Pebble Beach. “I remember watching (fellow PGA Tour-winner) Peter Malnati in the fall and he said, ‘Once I have a family, I’m going to dream about having them walk on the green after a win’ and I couldn’t agree more.”

Taylor was the first Canadian wire-to-wire victor on the PGA Tour in the modern era after his four-stroke triumph at Pebble Beach.

His first PGA Tour victory came five years ago at the Sanderson Farms Championship, an opposite-field event on the schedule.

The triumph not only gives Taylor a tidy US$1.4-million payday, but also an exemption into the Masters – something his previous triumph did not do. Taylor’s victory means there will be four Canadians in the Masters in April, tied for the most ever (Corey Conners, Adam Hadwin, and Mike Weir already locked up spots in the field).

When Taylor was being recruited for university golf teams, his coach didn’t think he’d have to wait nearly half a decade between celebrating PGA Tour wins. Matt Thurmond knew there was something special about Taylor. The week belonged to Taylor, a Canadian trying for his second PGA Tour title at a course he calls “one of the best” on the Tour.