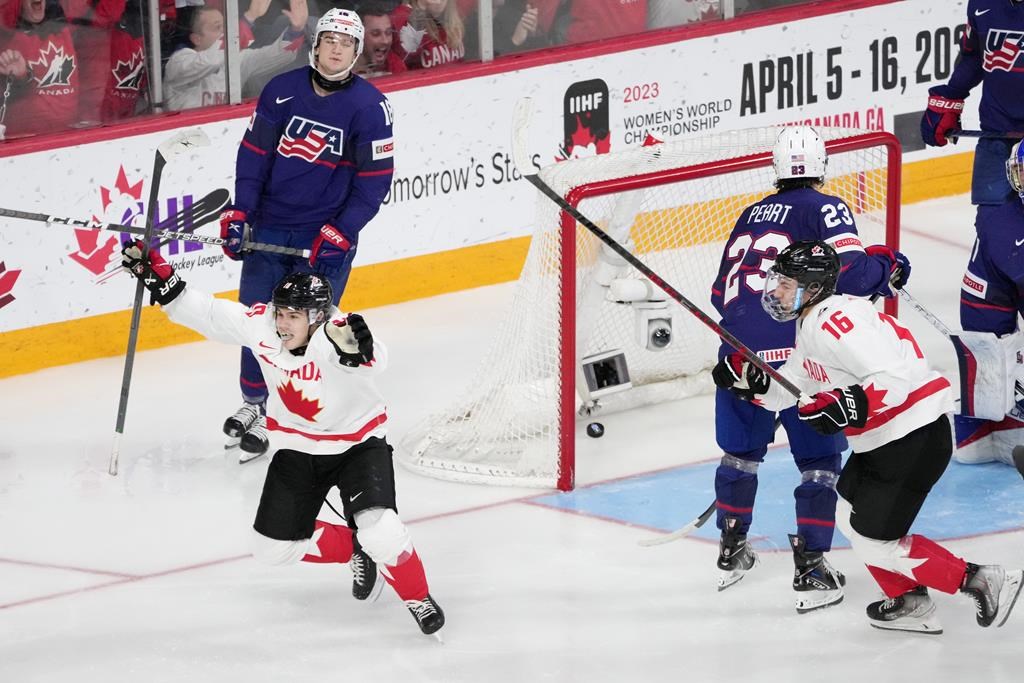 Thomas Milic is the only player on Canada’s roster passed over at the NHL draft.

An incredible performance Wednesday has his country one step from its 20th gold medal at the world junior hockey championship.

Milic was outstanding in making 43 saves as the tournament hosts fought back from an early 2-0 semifinal deficit in Halifax to defeat the United States 6-2 in another emotional matchup between the bitter international rivals.

“Definitely the best moment of my hockey career and maybe my life,” stated the 19-year-old from Coquitlam, B.C. “Pretty special.”

The netminder for the Western Hockey League’s Seattle Thunderbirds wasn’t picked at last summer’s draft, but isn’t focused on that as he preps for Thursday’s championship game versus the Czech Republic, which beat Sweden 2-1 in the other semifinal.

“It’s always in the back of my mind,” Milic said of not being selected. “But it’s not really something I think about too much now.

Joshua Roy had two goals, including one into the empty net, and two assists for Canada, while Connor Bedard, Logan Stankoven and Adam Fantilli each scored once and set up another. Brandt Clarke had the other goal along with an assist.

Logan Cooley and Kenny Connors replied for the Americans, who will play the Swedes for bronze. Trey Augustine stopped 31 shots.

“Got away from our identity,” said U.S. head coach Rand Pecknold. “Their goalie was the best player on the ice. He was excellent.

Canada, which advanced to face the Americans thanks to Bedard’s incredible individual effort in a dramatic overtime victory versus Slovakia in the quarterfinals, dropped a 5-2 decision to the Czech Republic in an embarrassing tournament opener.

“We definitely want some revenge,” Fantilli said. “We’re not happy about what happened earlier in the tournament.”

Expected to go high at the 2023 NHL draft — but also overshadowed at the men’s under-20 event by a breathtaking Bedard, the presumptive top pick in June and world junior scoring leader with 23 points in six games — Fantilli started the tournament on the second line, but was pushed to the fringes of the roster as the showcase progressed.

After the Canadians fought back to tie the score 2-2 early in the second, he scored his second goal of the event off a terrific pass from Zach Dean to ignite a red-clad Scotiabank Centre.

“Very, very happy to get my moment in that rivalry,” Fantilli said. “More importantly, I’m really happy that we got that win.”

Milic made a terrific stop on Jimmy Snuggerud off a 2-on-1 to keep Canada, which won its 19th gold at the pandemic-delayed summer tournament, in the driver’s seat.

“He was unbelievable,” Bedard said. “Without him, I don’t know if we win.”

The Americans had their neighbors on the ropes as the period wore on, but Fantilli set up Clarke for his second at 9:45 for some much-needed breathing room.

Roy iced into the empty net on a U.S. power play with 3:15 left to send the Canadians to Thursday’s final as fans chanted “We Want Gold” at Scotiabank Centre.

“The turnouts have been awesome,” Fantilli said the crowds in Halifax. “The way they’ve been in the game has been awesome. “They’re right on top of you and it feels like they’re in it with you.”