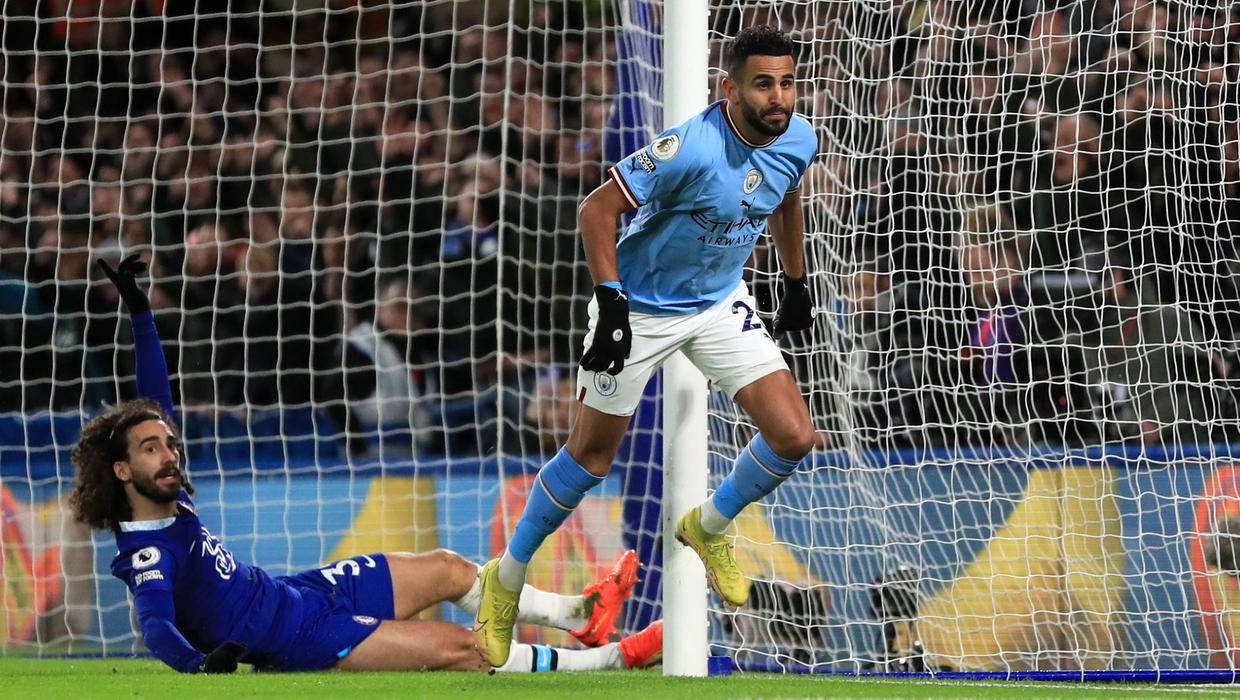 Manchester City closed the gap to Premier League leaders Arsenal back to five points and left Chelsea languishing down in 10th position after a 1-0 victory at Stamford Bridge on Thursday.

After City struggled to make inroads in an unfamiliar formation in the first half, substitutes Jack Grealish and Riyad Mahrez combined on 63 minutes for the Algeria winger to tap home and grab a vital three points.

Both teams had earlier hit the woodwork but it was Guardiola’s changes, in personnel and abandoning a three-at-the-back starting formation, that proved decisive.

The win means City take advantage of Arsenal’s first dropped home points of the season in a draw with Newcastle on Tuesday. Chelsea’s poor run of form under new coach Graham Potter continues, however, leaving them with just 25 points from 17 games and as close to the relegation zone as they are to a place in the top four.

“In the second half we were miles, miles better in every department. It’s a big result for us,” Guardiola told Sky Sports.

Ahead of Sunday’s FA Cup rematch between the two teams at the Etihad Stadium, there was further bad news for Potter with both Raheem Sterling and Christian Pulisic forced off with early injuries to add to Chelsea’s growing list of absentees.

Pulisic’s injury came following a firm but superbly executed tackle from John Stones that prevented the United States international from getting a shot on goal in one of the few clear openings of the first half.

It was Pulisic’s replacement, though, that came the closest to breaking the deadlock before the half-time interval. Making just his fifth Premier League appearance for the club, Carney Chukwuemeka cut in neatly on his right foot and unleashed a low shot that took a deflection off Rodri and came back off the post in the 44th minute.

At the other end, there were also signs of life late on in the period.

Erling Haaland got his first meaningful involvement when latching onto a Ilkay Gundogan through ball but poking his snap shot wide of the target.

Seeking an improvement, Guardiola made two modifications at the break, bringing on Rico Lewis and Manuel Akanji for Kyle Walker and Joao Cancelo, and reverting to a more familiar setup.

They almost got immediate dividends but Nathan Ake’s back-post header struck the crossbar from Kevin De Bruyne’s cross. De Bruyne then went close himself moments later, forcing a low save from Kepa Arrizabalaga from a stinging low shot.

Two more alterations soon arrived from Guardiola on the hour mark and within three minutes the new arrivals combined to give City the lead.

With the best passing move of the match, De Bruyne laid the ball out to the left for Grealish, who slipped a perfect ball across the face of goal that cut out Chelsea’s defence and goalkeeper to leave Mahrez with a simple finish at the back post.

With Potter having to turn to more inexperienced youngsters off the bench, Chelsea failed to find a response. Their last chance came and went in stoppage time as 18-year-old left-back Lewis Hall fired wildly off target.

“It’s a big three points for us,” Stones said adding the side regretted dropping points in a draw versus Everton in their last game. “How we especially played in the second half was brilliant.”