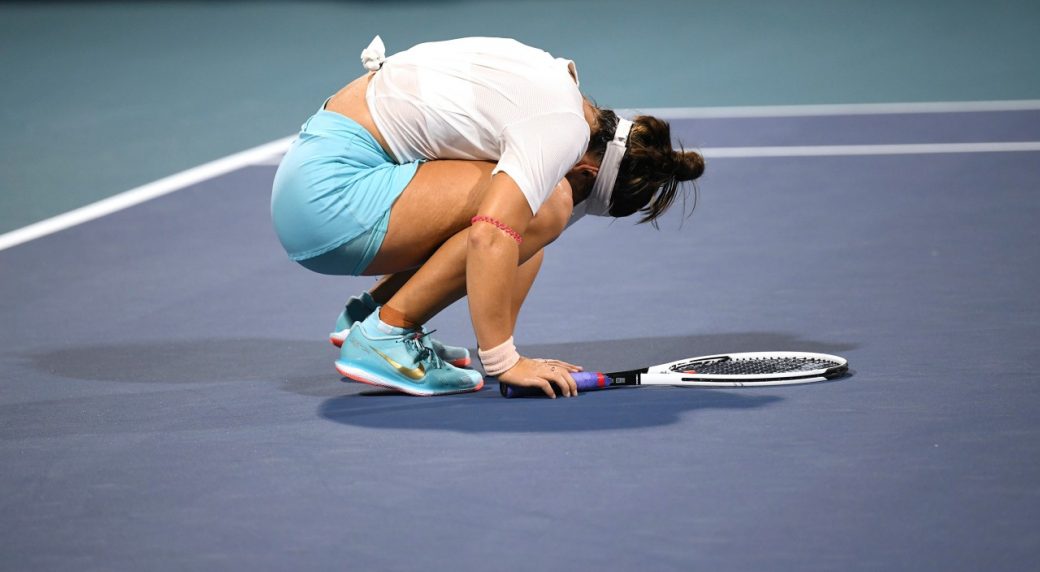 Bianca Andreescu has suffered another injury, ending her best tournament since capturing the U.S. Open title in September 2019.

The Canadian retired with a right ankle injury after falling behind 6-3, 4-0 versus top-ranked Ash Barty of Australia in the final of the Miami Open on Saturday.

The eighth-seeded Andreescu, from Mississauga, Ont., tumbled to the court in the third game of the second set and struggled with her movement after the fall. She was wearing tape on the right ankle for the entire final of the WTA 1000 event — one level below a Grand Slam.

Andreescu called a medical timeout to receive treatment from the trainer after Barty finished the game with a break to go up 3-0.

She returned for one more game, but wasn’t moving well.

“Definitely not the way I wanted to end the tournament,” Andreescu said. “But I’m super grateful nonetheless. I got to the final of one of my first tournaments in a while now, and I could not be more happy.”

Afterward, she put her hand to her face as she tried to hold back tears before going to the net to greet Barty and end the match.

Andreescu returned from a 16-month layoff in February at the Australian Open, losing in the second round of the Grand Slam. She suffered a knee injury late in 2019 and opted not to try to make a comeback earlier in the pandemic in 2020.

The 20-year-old Canadian followed up her first tournament back by reaching the semifinals of an event in Melbourne for players eliminated early from the Australian Open, but a leg injury suffered there kept her out until Miami.

Andreescu did not specifically address the nature of the injury when she made her speech during the trophy presentations.

However in a post-match interview, Andreescu expressed her irritation.  “It seems that I’m kind of the only one that keeps getting asked questions about injuries, which is super annoying,” the former world No. 4 told reporters.