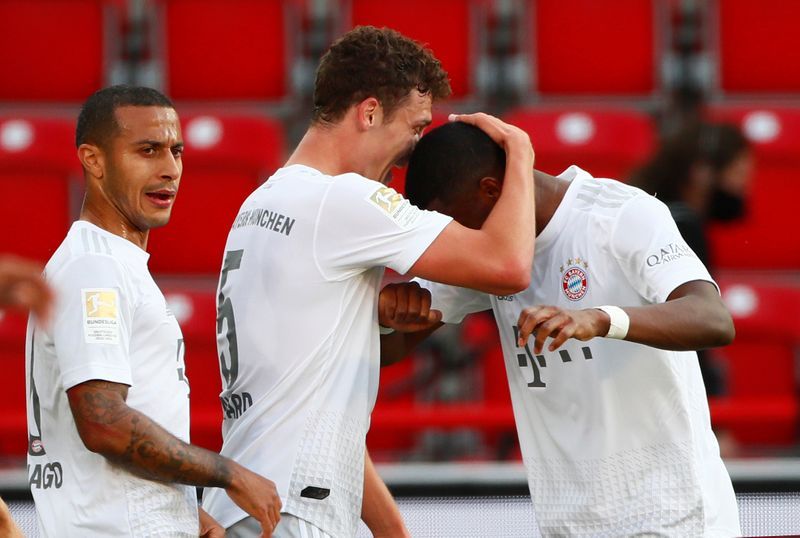 It was business as usual in a comfortable triumph for Bayern Munich, even if the low-key, low-volume return of the Bundesliga is still a highly unusual sight to behold.

Taking three points from Union Berlin moved Germany’s champions four ahead of Borussia Dortmund, with a Der Klassiker meeting due on 26 May. Robert Lewandowski collected his customary goal with a penalty and the defender Benjamin Pavard later headed home a Joshua Kimmich corner for the second.

Bayern will need to find extra gears versus Dortmund, highly impressive in beating Schalke 4-0 on Saturday. Win that and an eighth successive title will be within reach. “We didn’t show our best side in terms of play,” admitted the goalkeeper Manuel Neuer afterwards. “But we dominated the game and deservedly take the three points home with us.”

Union, safely in mid-table, have performed creditably since last season’s promotion but were facing the Bundesliga’s ultimate test, and doing so without home fans among the most fervent in Germany. Berlin police had warned supporters to stay away but later reported that a few dozen had gathered outside the stadium.

Alphonso Davies’s high tackle on Grischa Prömel brought the Canada full-back a yellow card. Then came Neven Subotic’s flailing foul on Leon Goretzka, who had blindsided the Serb, and an opportunity from the spot that Lewandowski was never going to pass up.

The Polish striker scored his 40th of the season, making it the fifth season in succession he has reached that tally, with a feint, a jump and a firm shot beyond his compatriot Rafa Gikiewicz.

Bayern’s attempts on goal piled up but they struggled to reproduce the slick football and threat they had exerted in pre-lockdown performances such as their late-February 3-0 Champions League victory at Chelsea. Kingsley Coman, on as a second-half substitute, howled in anguish when his driven cross failed to find any takers but Pavard’s neck muscles eventually made sure of the win 10 minutes from time.

A controlled performance with few scares suffered made it 15 victories from Bayern’s past 16 matches. The Dortmund encounter will, though, be far more indicative of whether the Bundesliga title is likely to return to its perennial destination.