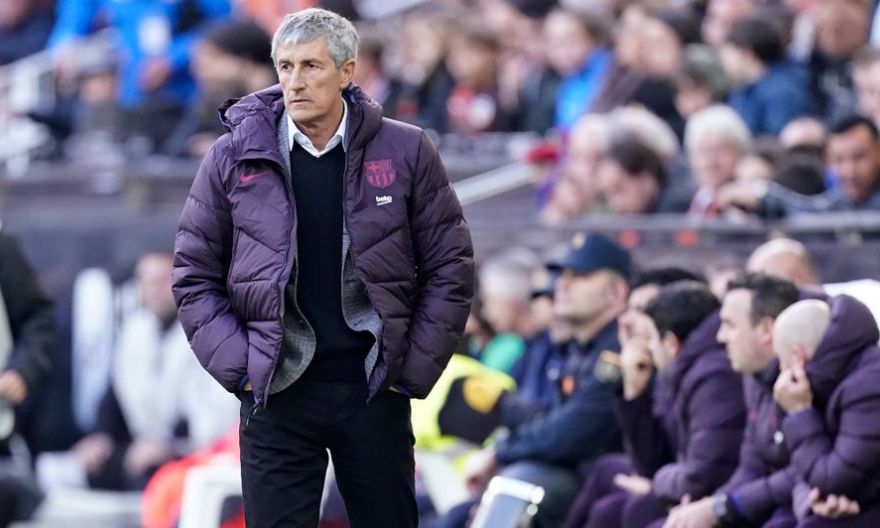 Barcelona hired Quique Setién to improve a team that was already leading the Spanish league.

Two weeks later, the defending champions are trailing Real Madrid and clearly having issues to adapt to the on-the-fly coaching change.

The team has boosted its possession of the ball and its number of passes, tenants of the orthodox Barcelona style professed by Setién that had waned in recent campaign. But that has yet to make it firmer on defense or lead to more goals compared to its performances under predecessor Ernesto Valverde.

Barcelona needed a goal by Lionel Messi to get past Granada 1-0 in Setién’s debut on Jan. 19. A double by Antoine Griezmann, including a second goal in stoppage time, saved them versus third-tier side Ibiza in the Copa del Rey with a 2-1 victory on Wednesday.

But on Saturday Barcelona was completely outplayed at Valencia, which was content to let Barcelona have the ball and then wait to pounce on the break. Valencia won 2-0 despite also missing a penalty and hitting the post. Madrid’s 1-0 victory at Valladolid on Sunday let it move three points ahead and take charge of the title race.

Setién acknowledged that his team has yet to play like he wants.

“We are evaluating the position of our players and the understanding we need to have to do what we propose,” Setién said after Saturday’s loss. “One thing is that (the players) understand it on the chalkboard and quite another is how we put it into practice.”

Setién’s three-man backline, a change from Valverde’s four defenders, left the team’s flanks exposed against Valencia. Ansu Fati and Jordi Alba, playing as wing backs, were unable to effectively join the attack. And, most disconcertingly for Setién, the midfield of Sergio Buquests, Frenkie de Jong, and Arthur failed to set up Messi and Griezmann in scoring positions.

Barcelona only got going once it was trailing in the score and after Arturo Vidal had replaced Arthur. Vidal set up Messi’s goal versus Granada and was his best partner in attack again at Valencia.

“There are things that (my players) didn’t interpret correctly,” Setién said. “That, or we didn’t explain them well. We made passes that didn’t help advance the team. There are things we need to work on to correct.”

Setién will need to work out the kinks in his team before Barcelona visits Napoli in the opening leg of their Champions League round-of-16 leg on Feb. 25.

Next up is Leganés in the Copa del Rey round-of-16 on Thursday.