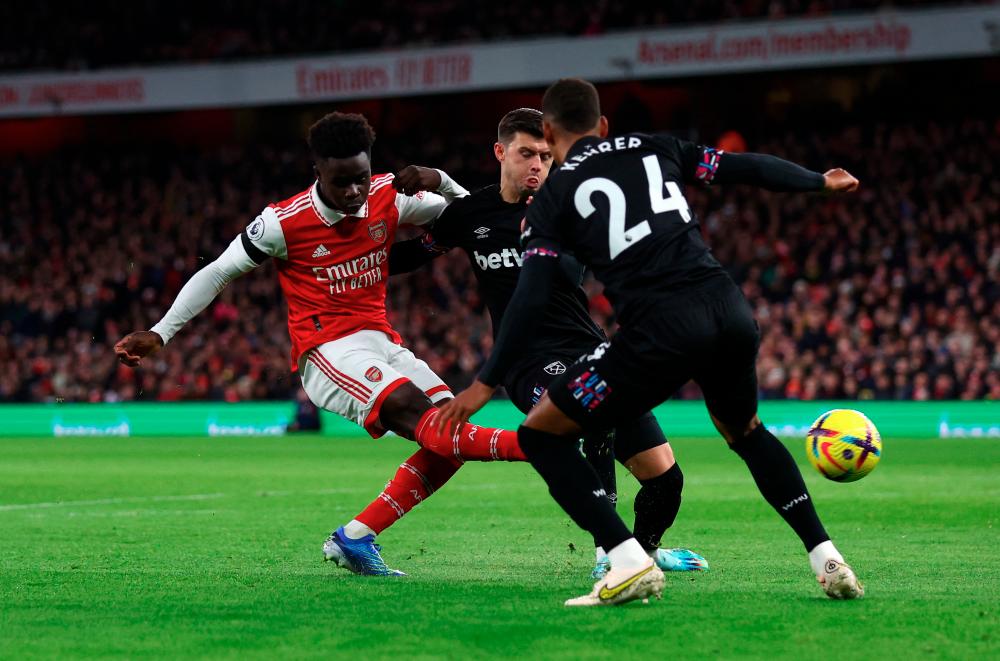 Arsenal padded their lead in the Premier League with a barnstorming, come-from-behind 3-1 victory over West Ham United at the Emirates on Monday night.

Arsene Wenger looked on from the stands in north London for the first time since leaving the club in 2018 following his 22 years as Gunners manager, as table-topping Arsenal moved to 40 points from 15 games this season.

Second-half goals from Bukayo Saka, Gabriel Martinelli and Eddie Nketiah cancelled out a first-half penalty by Said Benrahma to keep Arsenal seven points ahead of Newcastle United in second.

“We were very dominant today, we were just lacking that final pass,” Nketiah said. “But we kept going and once we got one we knew we’d get more because we could feel the atmosphere behind us.

“There’s a real unity and connection with the fans and we want to build on it.”

Arsenal looked lively in the opening 20 minutes, but it was West Ham that struck first with a penalty kick as Benrahma dispatched an effort from the spot following William Saliba’s foul on Jarrod Bowen in the area.

Mikel Arteta’s side spent much of the remainder of the first half in West Ham’s defensive third — showing off plenty of tidy one-touch passing — but could not find an equalizer and went into the break trailing 1-0.

Arsenal quickly went from one down to one up before the hour mark when Saka settled Martin Odegaard’s mishit shot and rolled it home past Lukasz Fabianski, and Martinelli lashed a tight-angled blast in at the near post to give his team the lead.

Nketiah provided Arsenal’s third to cap a delightful team move, cleverly turning to his left after Odegaard picked him out in the area and finding the back of the net at Fabianski’s far post to all but secure the points with 20 minutes to play.

Arsenal were playing their first match since the season paused for the World Cup and their first since key striker Gabriel Jesus was ruled out of action for three months with a knee injury while playing for Brazil in Qatar.

Any concerns the injury could derail Arsenal’s push for a first title since 2004 would have been heightened when they found themselves trailing at half-time, but a high-flying display in the second half put those fears to bed.

West Ham, who have not won away in the league since August, had done well to keep Mikel Arteta’s side largely out of the area in the first half but their defense gave way once Arsenal found their groove after the break, helped by some fantastic service from Odegaard.

Next up for Arsenal, who maintained their 100% record at home this season, is a New Year’s Eve trip to Brighton & Hove Albion, while David Moyes and West Ham host Brentford on Dec. 30.