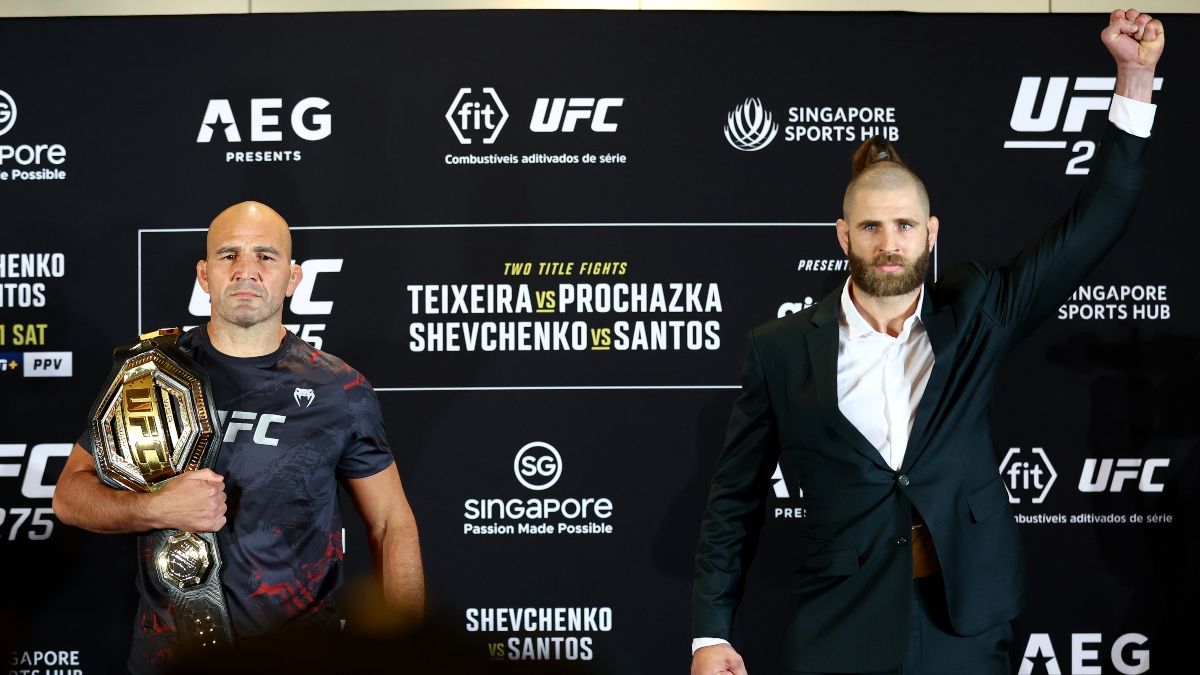 Two championship belts will be on the line during Saturday’s UFC 275 (10 p.m. ET, ESPN+ PPV) at Singapore Indoor Stadium in Kallang, Singapore, in one of the most action-packed PPV cards of the year.

The co-main event pits defending UFC flyweight Valentina Shevchenko versus Taila Santos. Shevchenko hasn’t lost a fight in over four years and will defend the 125-pound title against Santos, who is riding a four-fight winning streak. In Santos’ last match, she won ‘Performance of the Night’ for her first-round submission triumph over Joanne Wood.

The third fight is a rematch of arguably the greatest fight in MMA women’s history between Zhang Weili and Joanna Jedrzejczyk. Jędrzejczyk hasn’t fought since their faceoff in 2020, while Weili is 0-2 with consecutive losses to Rose Namajunas since their fight at UFC 248.

The question surrounding Teixeira’s ability to get the fight to the ground makes it hard to back either side.

However, Teixeira’s submission game combined with Prochazka’s striking ability on the feet provides a high chance of finishing potential — regardless of the winner.

After securing her first finish in the UFC, Santos will now attempt to match Amanda Nunes as the only fighter to get a victory over Shevchenko. Santos possesses good striking and a solid ground game, but is it enough?

Unless Santos catches the champion with a big shot, Shevchenko will control this fight and allow it where she wants it to go.

The same ingredients are in play between Zhang Weili vs. Joanna Jedrzejczyk 2. It should be a striker’s battle, with both fighters using a blistering pace of output. Their first fight was all over the place on scorecards, but Jedrzejczyk was ahead on two judge’s cards heading into the championship rounds.

This fight will be only three rounds, and her aggressive pace early will be critical if she’s going to outpoint Zhang. Yes, the fighters will exchange damaging strikes, but the knockout risk is low. While Zhang occasionally attempts takedowns, Jedrzejczyk has a stout takedown defense. Expect this to go the distance in a close decision.