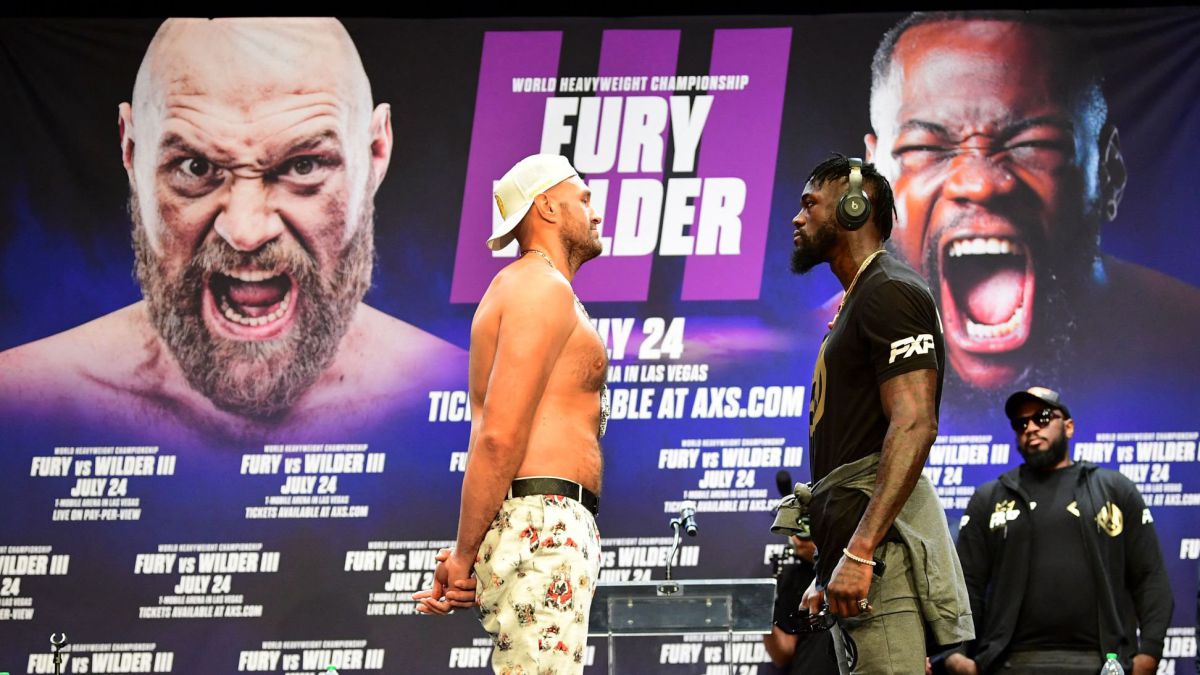 Tyson Fury and Deontay Wilder are set for their trilogy fight for the WBC heavyweight championship — again.

The clash between big men is now set for Oct. 9 at T-Mobile Arena in Las Vegas, Top Rank announced Thursday. The fight, an ESPN+ and Fox pay-per-view, was scheduled for July 24 but was postponed last Thursday after Fury tested positive for COVID-19 amid an outbreak in his camp. ESPN reported at the time that Oct. 9 was the target date for the rescheduled title tilt.

Per sources, Fury was tested on July 5 and was notified of the positive result the next day.

He tested negative on Tuesday and shortly after that was cleared by doctors to travel home. Fury received the first vaccine shot and experienced mild symptoms.

“I wanted nothing more than to smash the ‘Big Dosser’ on July 24, but I guess the beating will have to wait,” Fury said. “Make no mistake, I will be back and better than ever. We will fight Oct. 9, and I will knock him spark out!”

The champion, ESPN’s No. 6 pound-for-pound boxer, needs time to recover and resume training camp, pushing the fight to October, but there were also other considerations. Manny Pacquiao and Errol Spence Jr. meet in a major pay-per-view title fight on Aug. 21. Canelo Alvarez, boxing’s biggest star, remains in talks for a Sept. 18 fight with Caleb Plant.

Top Rank and PBC, which will co-promote Fury-Wilder, along with ESPN and Fox, are trying to maximize PPV revenue for the third meeting.

The second battle, which Fury won by seventh-round TKO in February 2020, generated nearly $17 million at the gate, a Nevada record for a heavyweight title fight.

“It was a crazy roller coaster toward this fight,” Fury said at last month’s news conference in Los Angeles to promote the fight. “I always say, ‘You’re never fighting someone until you’re in the ring opposite them.'”

Three other heavyweight bouts — Efe Ajagba vs. Frank Sanchez, Robert Helenius vs. Adam Kownacki 2 and Jared Anderson vs. Vladimir Tereshkin — that were originally arranged as part of the July 24 undercard have also been moved to Oct. 9, sources tell ESPN.

The first fight between Fury and Wilder was in December 2018, a disputed draw. Despite Fury suffering two knockdowns — including one in the final round — most observers believed he deserved the nod.

The “Gypsy King” left no doubt in the rematch, scoring two knockdowns himself en route to a seventh-round stoppage after Wilder’s cornerman, Mark Breland, threw in the towel.

Neither Fury, 32, nor Wilder has appeared in the ring since. Wilder, 35, exercised his contractual right to a third fight afterward, but the pandemic prevented Top Rank (Fury’s promoter) and PBC from staging the fight before a full audience.