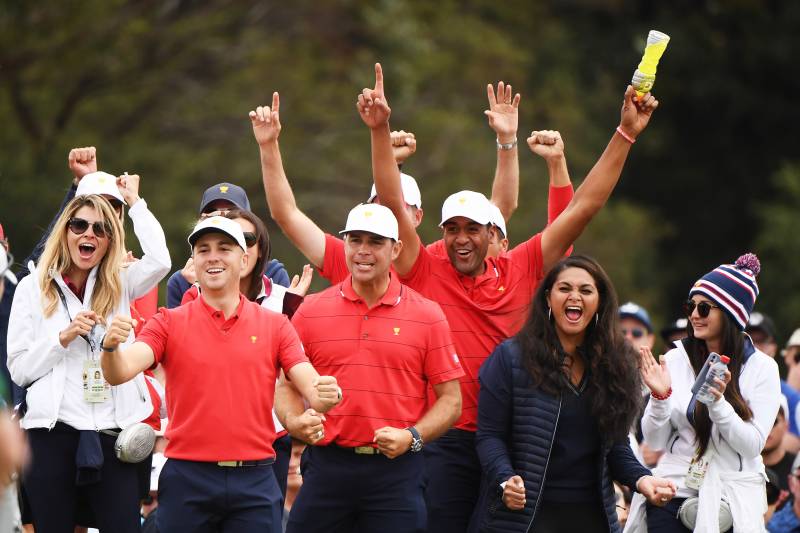 There were high emotions and fierce hugs from Tiger Woods, this time as a winner both ways in the Presidents Cup.

Woods capped off a big year that started with his 15th major at the Masters by playing and leading his U.S. team to another win in the Presidents Cup on Sunday at Royal Melbourne.

The first playing captain in 25 years, he opened the 12 singles matches by defeating Abraham Ancer to set the Presidents Cup record with his 27th match victory, and set the tone for the rest of his team.

The scoreboard was filled with American red scores all day as they rallied from a two-point deficit to win the Presidents Cup for the eighth straight time versus an International team that faltered at the worst time.

Matt Kuchar delivered the clinching putt, a 5-footer for birdie that assured him a halve versus Louis Oosthuizen and gave the Americans the 15½ points they needed to win.

“For us to be in a hole, to come back and win this thing . . . to win it as a team, but to do it with Tiger Woods as our captain was just a huge thrill,” Kuchar said.

The result was 16-14, and at least this one was a contest. The U.S. victory two years ago at Liberty National was so resounding that it nearly ended on Saturday.

Woods hugged everyone hard, players and vice captains alike, wearing a smile not seen since he walked off the 18th green at Augusta National after becoming a Masters champion again following injuries that nearly ended his career.

“We relied on one another as a team, and we did it — together,” Woods said, his voice choked slightly with emotion. “This cup wasn’t going to be given to us. We had to go earn it. And we did.”

The next Presidents Cup is in 2021 at Quail Hollow Club in North Carolina. In the meantime, the Americans will try to get on another team and win back the Ryder Cup, which gives them far more trouble.

Christine Sinclair honoured as Canadian soccer player of the decade