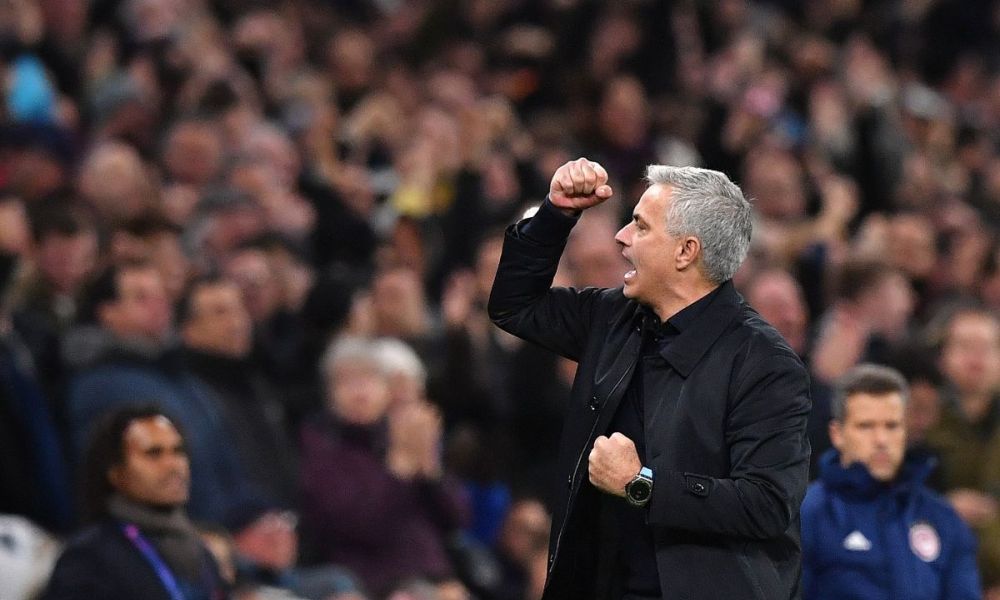 Jose Mourinho made a dramatic entrance at his new home as Tottenham came from two goals down to defeat Olympiakos and qualify for the Champions League knockout phase.

Mourinho made a low-key entrance for his first game as manager at Tottenham Hotspur Stadium – but then it was drama all the way as he was subjected to all facets of the side he inherited from released Mauricio Pochettino.

Spurs were dreadful at the back in the first half, going behind after only six minutes to Youssef El-Arabi’s low drive and conceding a second 13 minutes later when Ruben Semedo scored from close range at a corner. Mourinho acted quickly, sending on Christian Eriksen for Eric Dier, but it still took a terrible error from Yassine Meriah to gift Dele Alli a goal in first-half stoppage time to throw Spurs a lifeline they accepted with relish.

Harry Kane levelled from Lucas Moura’s cross five minutes after the break, Mourinho hugging an alert ball boy who helped Serge Aurier take a quick throw-in that caught Olympiakos flat-footed, and the recovery was complete 17 minutes from time when the defender powered home a finish at the far post from Alli’s cross.

Mourinho fist-pumped furiously in delight and he was ecstatic again when Kane wrapped things up with a header from Eriksen’s inviting free-kick.

The England captain broke Alessandro del Piero’s record as the player to score 20 Champions League goals in the fewest games – 24, compared to the Italian’s 26 matches with Juventus.

Mourinho stayed on the pitch at the final whistle to congratulate his Spurs players before politely applauding fans behind the technical area and making his way down the tunnel. Mourinho, however, will not get carried away because he will note how Spurs were so easily cut open early on and how defensive uncertainty, and moments of poor communication between goalkeeper Paulo Gazzaniga and his backline, threatened more issues.

He knew he had issues to solve when he succeeded Pochettino and two wins from two will not blind him to the fact they still need addressing.