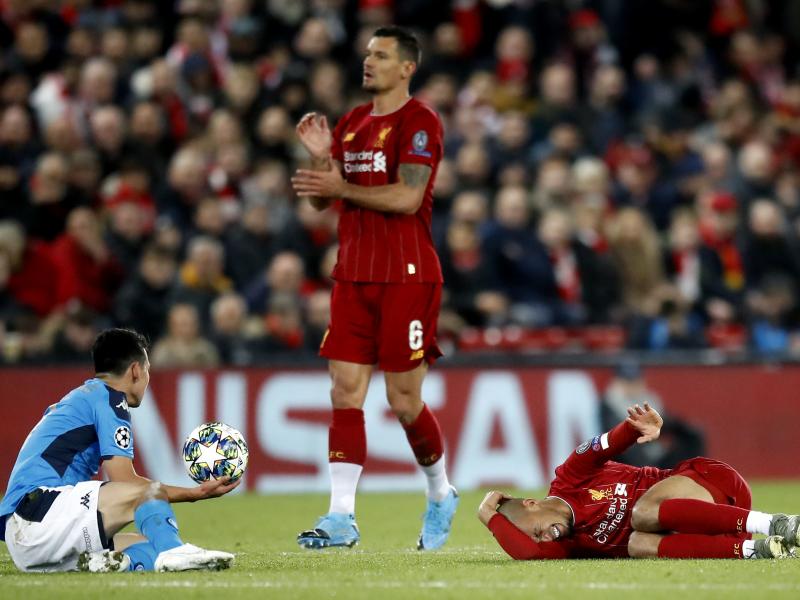 Jurgen Klopp says he is unsure of the seriousness of Fabinho’s injury, but says the outcome is “massive” after the midfielder limped off in Liverpool’s 1-1 draw with Napoli.

Fabinho, who has played in all but one of Liverpool’s Premier League match this season, limped off in the first half after team-mate Dejan Lovren attempted to tackle Hirving Lozano.

He was substituted by Georginio Wijnaldum in the 19th minute and is banned for Liverpool’s Premier League fixture against Brighton on Saturday, but Klopp will be keen to have him back for the Merseyside derby next Wednesday. “The biggest thing is the Fabinho injury, that’s massive,” said Klopp.

“It’s early and we all hope it’s not too serious but it’s pretty painful and in an area you don’t want to have pain, around the ankle.”

Asked by reporters how serious the injury could be, Klopp added: “I don’t want to say what I expect because I hope it is not serious.

The 1-1 draw with Napoli means Liverpool need a result in Salzburg in a fortnight’s time, and means Klopp cannot rest some of his star players amid a hectic period of fixtures.

But Klopp said he never expected to have it easy enough to have the luxury of going to Salzburg not needing anything.

“Last year we had to win at home 1-0 against Napoli, I cannot remember a bigger pressure game than that. So, really difficult, and we did it. “I know how human beings are; people wished we could finish the group tonight and make kind of a holiday game in Salzburg.

“That’s the situation: if we have ambitions in the Champions League, we have to show that in Salzburg.

Roger Federer´s face to be minted on Swiss franc