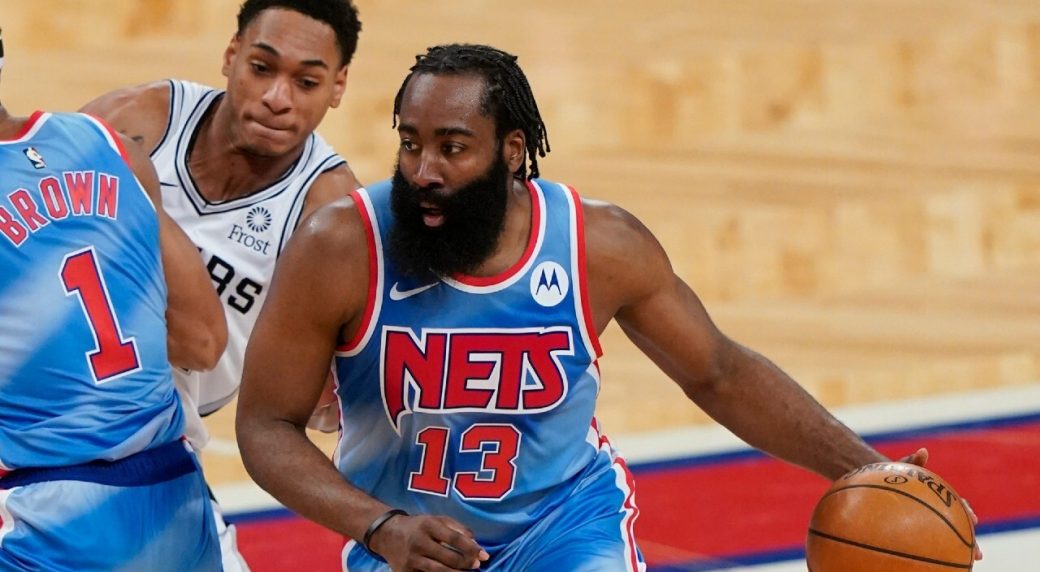 James Harden returned to the Brooklyn Nets’ lineup on Wednesday versus the San Antonio Spurs after missing more than a month with a hamstring strain.

Still, the Nets will have to wait, once again, to see their Big Three in action. Kyrie Irving did not play because of a facial contusion.

Harden had 18 points and 11 assists as the Nets outlasted the Spurs 128-116. Harden also had seven rebounds after the longest layoff of his career. Landry Shamet scored 21 points and Nicolas Claxton had a career-high 18 for the Nets, who won their third straight and pulled within 1 1/2 games of Philadelphia for the Eastern Conference lead.

“I study the game. I’m very unselfish. I take the game and I play the right way every single night,” said Harden, who played 26 minutes. “So, I don’t try to do anything that I can’t do, or anything that doesn’t benefit our team. And that mindset right there keeps me in a really good place.”

The decision for Harden to play was made minutes before he warmed up in Barclays Center on Wednesday evening. Harden did not start and was on a minutes restriction, coach Steve Nash said. It was the first time that Harden has come off the bench for a regular-season game since April 2012.

But it was clearly important for him to fine-tune his game for the playoffs.

“Preseason is one thing. The regular season is another level. The postseason is an entire another level,” Harden said. “The levels increase as you go different rounds, too. For me, I wanted to get out there and just be on the court, let them feel my presence and also get my conditioning and my wind back up, and be effective on both ends of the ball for an extended period of the game.”

Nash has limited minutes with stars coming back from extended absences before. Kevin Durant came off the bench earlier this campaign when he returned from a hamstring strain. At the time, Nash said that because Durant was on a minutes restriction, he wanted to ensure that Durant would be available to close the game in the event the Nets needed him to pull out a victory in a close contest.

Irving, meanwhile, was injured in the third quarter of the Nets’ game versus Chicago on Tuesday night when he went up for a rebound and Nikola Vucevic inadvertently elbowed Irving in the face. Irving has been cleared of a concussion, Nash said.

Nash added that because he has been cleared, Irving will be able to play in the Nets’ remaining two games if he is feeling well enough.

“It’s a matter of how comfortable he is playing,” Nash said. “And if they get that time together, it would be great. If they don’t, they don’t.” The Nets’ three stars — Irving, Harden and Durant — have played in just seven games together this season. Harden, who last played on April 5, has missed the Nets’ past 18 games. After making progress on the injury, Harden suffered a setback in his rehab on April 19, further delaying his return.

Serena Williams out in second round of Italian Open