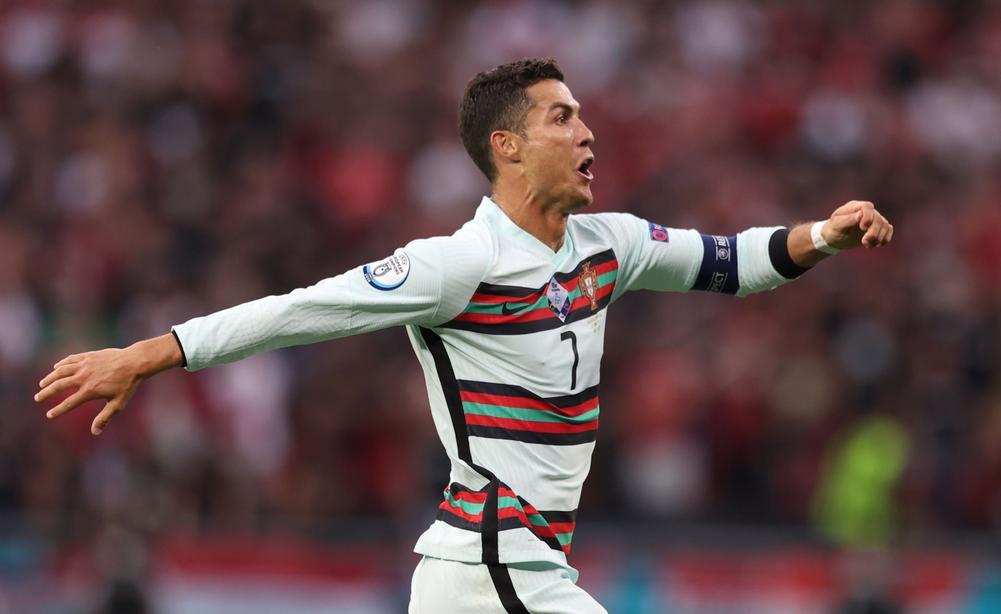 Portugal star Cristiano Ronaldo netted twice to make history at Euro 2020 on Tuesday, making him the leading scorer in the Championship’s history with 11 goals in a men’s record fifth tournament appearance.

The Portugal captain overtook France great Michel Platini with his first goal in a 3-0 victory over Hungary when he converted a penalty kick in the 87th minute. He rifled the ball into the corner of the net and set off for one of his trademark celebrations, which drew plenty of whistles from the capacity 67,000 mostly Hungarian fans at the Puskas Stadium in Budapest.

Ronaldo then scored his second on a tap-in as full-time approached, which overtook the records of Germany’s Birgit Prinz and Inka Grings, who both scored 10 at the women’s European Championship. The women’s tournament is arranged every two years, compared with four years for the men’s equivalent.

The Juventus striker took his tally to 106 goals in 176 appearances for Portugal, three fewer than Iranian Ali Daei’s men’s record of 109 international goals. The record is held by Christine Sinclair of Canada, with 186 goals.

Ronaldo is the only man to score in five European Championship tournaments, extending his own record.

“It was a very difficult game but we got three goals. It was vital to win and start the tournament with confidence and now we want to keep on winning,” said Ronaldo.

Portugal coach Fernando Santos added: “If we’d scored earlier it would have been easier for us. We missed a few chances then had some anxious moments but found our composure again and finished the game well.”

Tuesday was cause for a double celebration for the Portugal talisman, who also set a men’s record for five Euros appearances.

He first appeared at a European Championship in 2004 when he helped Portugal reached the final on home soil. He has played in every tournament since and scored in each.

Spain’s Iker Casillas was part of five La Roja squads from 2000 to 2016 but did not play in two of the tournaments, making Ronaldo the first man to be selected and play in five European Championships.

“This is my fifth European Championship but for me it feels as though it’s my first,” Ronaldo said ahead of Tuesday’s game.

There have been 17 men to appear at four European Championships, including Germany’s Lothar Matthaus and Denmark’s Peter Schmeichel.

Ronaldo also extended his own record of most appearances at the Euros, moving on to 22.

Ronaldo, who led Portugal to success at Euro 2016, broke another record by surpassing Spain duo Andres Iniesta and Cesc Fabregas for most matches won in the tournament with 11.

Following his appearance versus Hungary, Ronaldo is three games from breaking the record of 58 appearances in European competition (qualifying phase and finals), held by Italy goalkeeper Gianluigi Buffon.

“Players who have longevity in football are those who can adapt,” Ronaldo said of the secret behind his long and successful career. “The numbers speak for themselves: I have adapted from 18 to 36. I always work to achieve things on a personal and collective level.”

Ronaldo completed his third season at Juve, scoring 36 goals in 44 appearances despite missing several games due to COVID-19. The former Real Madrid star was unable to help Juve go past the round of 16 of the Champions League and the Turin giants also failed to win the Serie A title, finishing fourth — 13 points behind Scudetto winners Inter Milan.

Ronaldo has a year left on his contract with Juventus but has not committed to the side and is expected to decide his future after the tournament is over. Portugal also take on France and Germany in Group F.