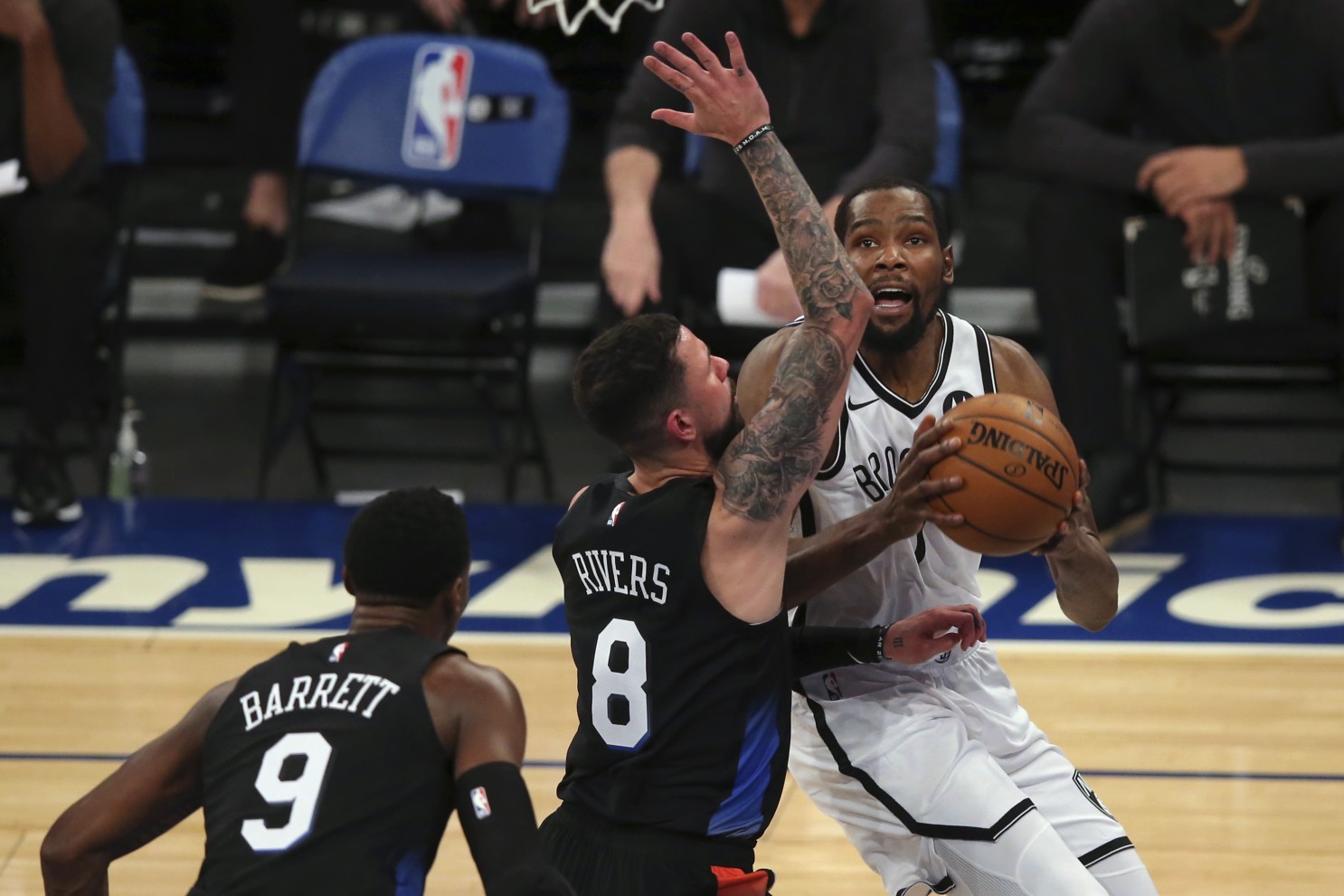 James Harden might soon be in Brooklyn and Kyrie Irving could soon be back, giving the Nets a potentially tantalizing trio.

Kevin Durant’s focus was on something else Wednesday.

“We really wanted this game tonight and everybody played like that,” Durant stated.

Durant scored 26 points to lead the Nets — short-handed after agreeing to a trade for Harden — to a 116-109 triumph over the New York Knicks. Durant was already scheduled to play on both nights of a back-to-back for the first time since surgery to repair his Achilles tendon.

He maybe had to do a little more than planned after the Nets shook up their roster earlier in the day with a four-team blockbuster centered around the acquisition of Harden, the three-time NBA scoring champion.

Durant, who has won four scoring titles, didn’t want to talk about Harden yet, with the deal still not approved by the NBA.

With Irving missing a fifth consecutive game for personal reasons, the Nets had only nine players. The four who are to be included in the trade, confirmed by a person with knowledge of the situation, were not at Madison Square Garden.

The Nets lost some good ones — Caris LeVert, Jarrett Allen and Taurean Prince have all been starters and played important roles — but still were plenty good enough and might be even better if the Durant-Harden-Irving tandem works out.

“But tonight we had to focus on the task at hand and that was getting the ‘W’ tonight,” said Nets forward Jeff Green, a teammate of Harden’s in Houston last season.

Joe Harris and Bruce Brown each added 15 points for the Nets, who broke open the game with a 15-2 burst to close the first half.

Julius Randle scored 30 points and RJ Barrett had 20 for the Knicks, who dropped their fourth straight but at least rediscovered some offense after being held below 90 points in the previous three.

“I’m looking forward to the next game. We’re just trying to get back on track,” said rookie guard Immanuel Quickley, who scored 19 points.

Brooklyn’s lead was just 46-43 with about 4 1/2 minutes remaining in the half before Durant threw a lob that DeAndre Jordan slammed down while getting fouled. Durant followed with a 3-pointer and the two had consecutive dunks for the last two baskets of the half as the Nets opened a 61-45 lead.

The lead was still 16 after three before the Knicks made it appear close in the final minutes, mostly while Durant was on the bench. Durant went over 20 points in his franchise-record ninth straight game to begin a season, his first game at Madison Square Garden since he and Irving joined the Nets in July 2019 while a Knicks team that had enough money to afford two superstars couldn’t land any.

Irving still hasn’t played across town as a Net, missing one game last season while injured and sitting out the second on the day Kobe Bryant died.