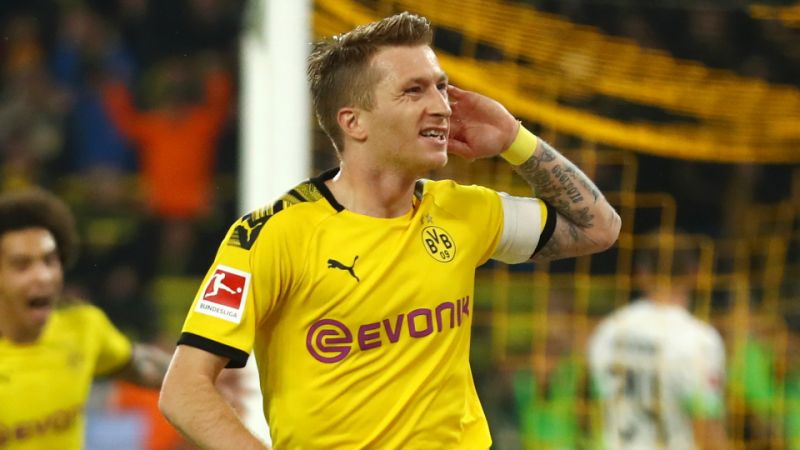 Borussia Dortmund have been dealt a major blow after confirming captain Marco Reus will be sidelined for an indefinite period after failing to recuperate from a groin injury.

Germany international Reus has missed most of the year already after suffering the set-back in February, but his comeback has now been delayed after a flare-up as the club return for pre-season training on Thursday.

Reus has endured an injury-hit career and further issues this campaign saw him start just 18 times in the 2019-20 Bundesliga season.

In a statement, his club confessed the German forward faces ‘an indefinite period’ on the sidelines due to tendon inflammation in his groin.

Dortmund sporting director Michael Zorc added: “Unfortunately the tendon is still inflamed. He cannot train with the team yet. It is difficult to give a time frame. This is the case with tendon injuries in the adductor region.”

‘Borussia Dortmund will still have to be without Marco Reus. The captain has problems with tendon inflammation at the same injured groin muscle. He will be out for an indefinite period.

‘Reus has worked intensively in recent months and has taken steps forward. But he still has problems with some movements.’

German clubs are already preparing for the new campaign, which begins September 18, but Dortmund’s preparations have been hampered after discovering that Reus will not be able to get himself fit over pre-season.

The 31-year-old’s fitness woes have blighted his promising career and forced him to miss Germany’s winning 2014 World Cup run.

Dortmund concluded the league season in second place, behind Bayern Munich, who won a record eighth successive league title. The club last won the league in 2012 under then coach Jurgen Klopp before the arrival of Reus.

Mats Hummels is also out injured for a short spell having twisted his ankle while training on holiday.