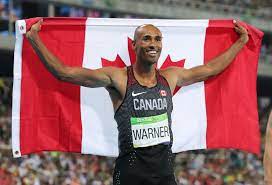 Damian Warner set a Canadian and world best in the long jump on Saturday in his first decathlon since the 2019 track and field world championships.

“Before I started doing the decathlon I was a long jumper in high school and I had dreams of going to the Olympics as a long jumper,” Warner said. “I had a couple of injuries and it didn’t quite work out and I kind of gave up on the long jump and moved to the decathlon.

“It has kind of picked at me, ‘Would I have been able to make it as a long jumper,? This result was awesome because it showed if I stuck with it and keep working at it then I can compete with some of the world’s best.”

That result helped propel Warner into the overall lead after the first five events — 100 metres, long jump, shot put, high jump and 400 — with 4,743 points. Pierce LePage of Whitby, Ont., was second with 4,421.

A decathlon world best is the top mark in history that is set within the 10-event decathlon.

“Everything went well,” Warner said. “It’s been a long time since I was out here, so to come out here and perform this well is awesome.”

So too is being on the cusp of cracking the 9,000-point plateau.

Warner, who acquired bronze at the 2016 Rio Olympics, is aiming to be the first person to win six Hypo Meeting titles.

The Hypo Meeting is considered an unofficial world championship for multi-event athletes.

Warner’s results come after a roller-coaster year that saw him locked out of his training facility at the University of Western Ontario due to COVID-19 safety protocols.

Warner couldn’t travel to the U.S. to train in the winter so his team, with the help of numerous volunteers, built an indoor training facility in the 66-year-old, unheated Farquharson Arena.