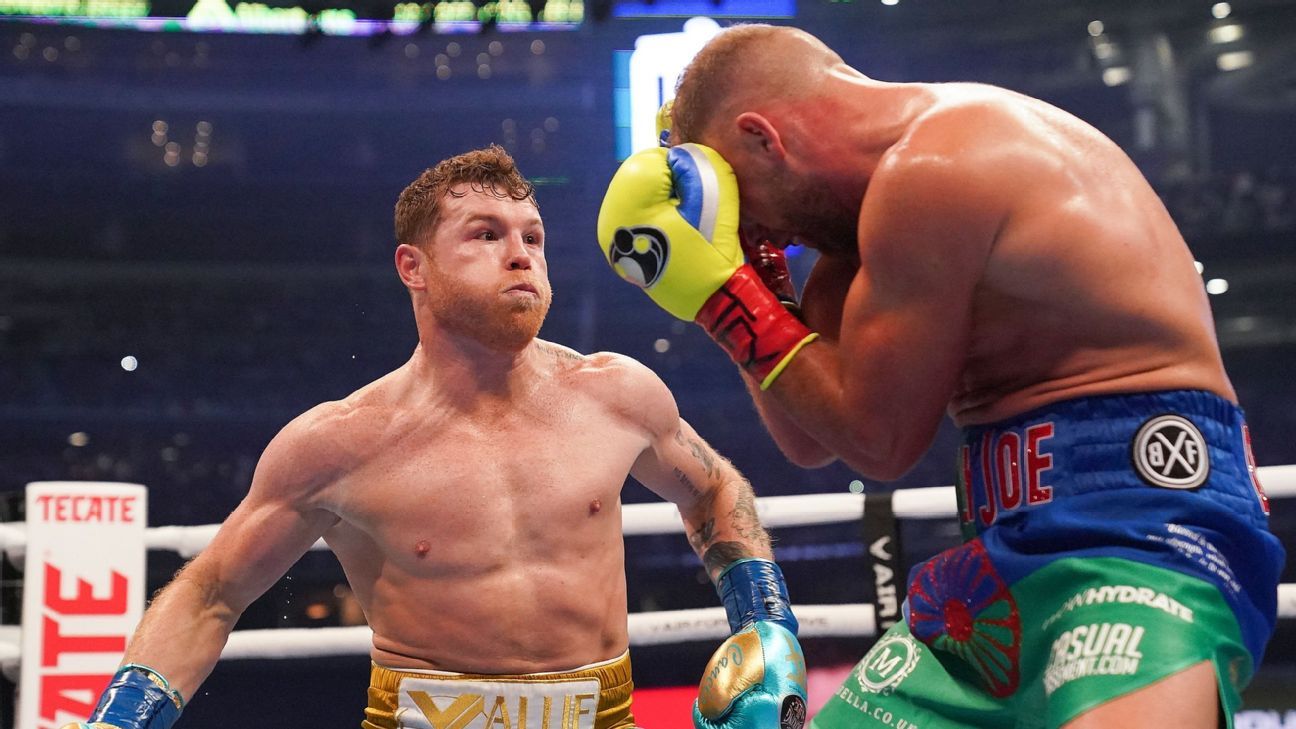 Canelo Alvarez could feel it coming.

In the eighth round at AT&T Stadium on Saturday night, the Mexican champion egged on a record-breaking crowd as he pelted Billy Joe Saunders in their super middleweight unification bout. Alvarez inflicted enough damage to enhance his legacy, winning the fight after it was waved off between the eighth and ninth rounds.

Saunders’ right eye had swollen shut, and the fight was called off with Saunders still on the stool. With the triumph, Alvarez holds three of the four belts in the 168-pound division.

Saunders, who lost his WBO belt in his first professional defeat, was taken directly into an ambulance and was suspected to have a broken orbital bone, according to his promoter, Matchroom Boxing.

A crowd of 73,126 was announced at the home of the Dallas Cowboys, breaking the record of the largest indoor attendance for a boxing event in the United States. The previous mark was 63,350 for the Muhammad Ali-Leon Spinks rematch in 1978.

The crowd for Alvarez-Saunders is believed to be the biggest gathering in the United States since COVID-19 became a pandemic.

Alvarez (55-1-2, 38 KOs) turned the fight in his direction in the pivotal eighth round. He started to overwhelm Saunders (30-1, 14 KOs) with punches while playing to the raucous crowd greatly favored for one of the sport’s pound-for-pound best from Guadalajara, Jalisco, Mexico.

The turning shot came in the middle of the ring. Alvarez unleashed a looping, right uppercut that hit Saunders squarely on the right eye as the fighter from Hatfield, England, attempted to duck beneath it. When Saunders turned and walked to his corner, the eye had noticeably swollen shut.

Saunders’ trainer, Mark Tibbs, told ESPN it was his call to stop the fight and that there wasn’t any objection from others in the corner, including Saunders.

“He’s a young man,” Tibbs said. “He’s got a family. He’s got children. I’ve known him a very, very long time. He lives to fight another day.”

Middleweight champion Demetrius Andrade, who has long clamored to face Alvarez and other similar fighters interrupted Alvarez’s post-fight news conference. Alvarez, in a good and engaging mood, repeatedly told Andrade to “get the f— out” of the room and called him a horrible fighter, which escalated the situation between the men.

Alvarez maintained that his short-term goal was winning all four belts in the 168-pound division to become the first undisputed champion in the modern era. In the postfight interview, Alvarez clamored for that fight along with Matchroom’s Hearn, who has worked with Alvarez in his three fights since splitting from Golden Boy Promotions.

“That’s the fight that has to happen for boxing — the undisputed championship at 168 pounds,” Hearn said on DAZN. “It’s the must-make fight next. What’s Caleb Plant going to do?” Throughout fight week, Alvarez said he wanted to secure that feat to enhance his legacy. He took a big step toward that on Saturday night.