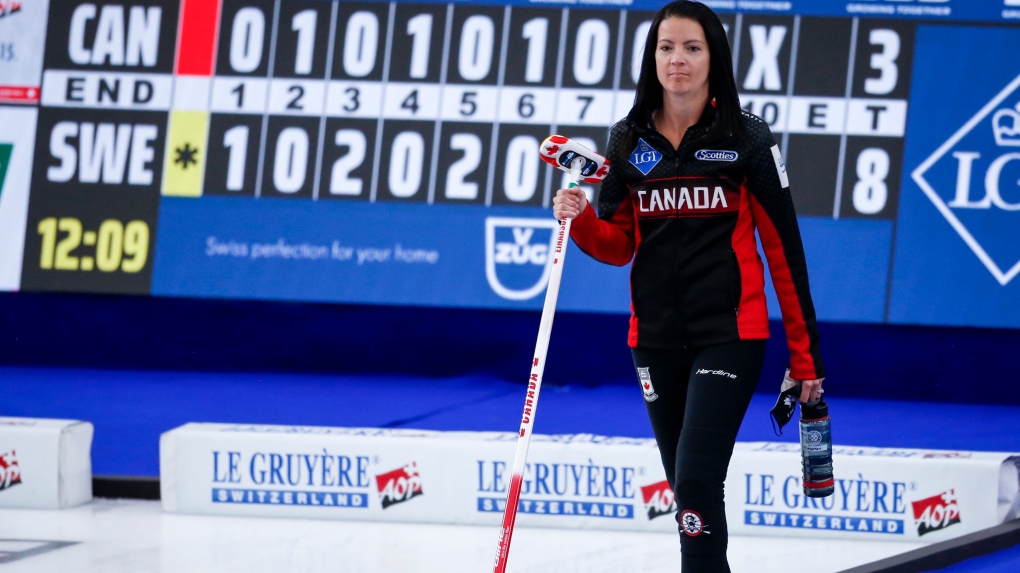 Kerri Einarson kicked off play in the curling bubble with a bang. She’s leaving it with a whimper.

Her Manitoba-based team was eliminated from the world women’s curling championship on Saturday after dropping an 8-3 decision to Sweden’s Anna Hasselborg.

The qualification match loss capped a mediocre week from the Canadians, who barely made the six-team playoff cut before having their medal hopes dashed.

“We left it all out there,” stated Canada third Val Sweeting. “We fought hard. It wasn’t the game that we wanted. We just kept trying to make shots and figure it out but it just wasn’t our morning.”

Sweden did not let Canada generate much offence, regularly forcing the Einarson side to settle for singles. The reigning Olympic champions were in top form, setting the early tone by making their deuces and keeping the Canadians in check.

Hasselborg drew for a pair in the seventh end to make it a four-point game. Her brilliant runback double-takeout in the eighth led to a steal and Canada conceded.

“I had a really good feeling going into the game,” Einarson said. “We just got behind the eight ball a little early and just needed something to bail ourselves out.

“We just weren’t as sharp as we have been.”

It was the first time that Canada has been held off the podium at both the women’s and men’s world championships in the same campaign.

Canada did not make it to the semifinals in either event. Brendan Bottcher’s Alberta-based team was also eliminated in the qualification game at last month’s world men’s playdowns.

“This is our very first time on the world stage and we became a tight-knit family in here,” Einarson said, her voice cracking at times. “We’ll just grow from it and learn from this experience. I’m so excited to see what’s next for us.”‘

All four members of the Hasselborg team threw at least 91 per cent. Sweden advanced to play Russia’s Alina Kovaleva in the evening semifinal.

“The girls played really, really well today and they judged weight perfectly,” Hasselborg said. “We communicated well, so really a solid game. We had lots of fun so it was really amazing.” American Tabitha Peterson drew the button for an 8-7 victory over Denmark’s Madeleine Dupont in the other qualification game.