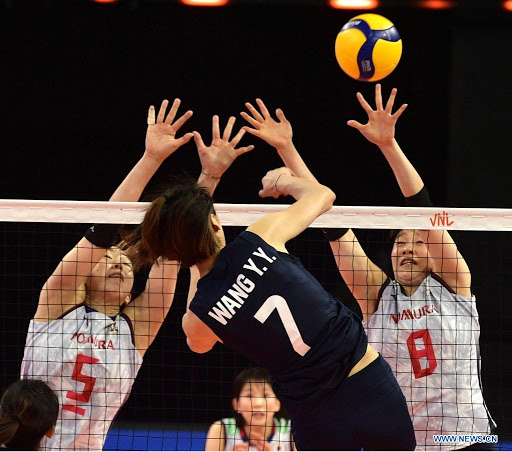 An up-and-down debut performance by Canada’s women in Volleyball Nations League continued with a second consecutive defeat on Monday.

Japan recorded its fifth sweep in eight matches, defeating the Canadians 25-16, 25-15, 25-15 in preliminary round play in Rimini, Italy.

Japan prevailed 41-25 attacks and racked up six aces to Canada’s pair in improving to 6-2 and sits fourth among 16 teams.

“Our performance today was good,” Ishikawa told Volleyball World. “We made less mistakes — some happened, but either way we managed to beat Canada 3-0, so this is very important for us.

“We have three match days and then three non-match days, it’s not a lot of time, but we try to improve and we focus on what we have to do.”

The 12th-place Canadians are 2-6 after being handed their second three-set loss.

They appeared headed for a third consecutive triumph on Sunday, taking the first two sets versus Poland before losing three in a row just days after beating 2016 Olympic champions China and then Germany.

“We have been dealing with a lot of teams that are very tall, especially when we played against Poland,” said Canada opposite hitter Shainah Joseph. “Having to switch over the next day and play shorter team, a team that has a very good block control, it was even tougher because we had to be more patient during the rallies.

“One of the positive things out of this game is that we had an opportunity to have some other girls that were on the bench to come in and see what they can bring.”

Canada registered nine blocks on Monday to Japan’s four but 24 errors over three sets was its downfall.

Opposite hitter Kiera van Ryk collected a team-high nine points after a 28-point performance on Sunday against Poland.

The 15-match preliminary round runs until June 23 with the top four countries advancing to the semifinals and finals. The Canadians return to the court Tuesday versus the Netherlands (5-2). The Dutch blanked Japan 3-0 on Sunday and are fifth in the standings.