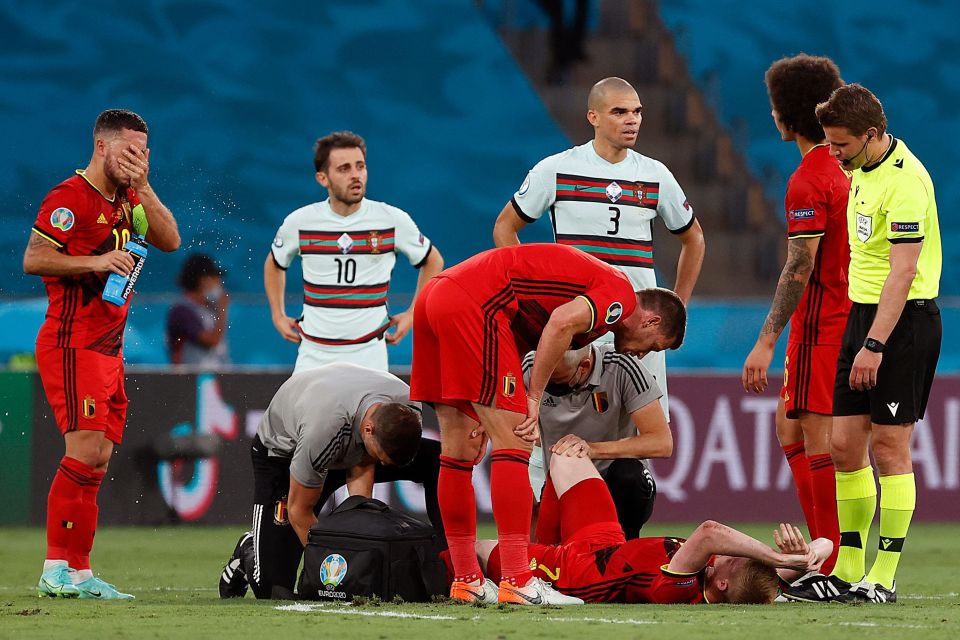 Kevin De Bruyne and Eden Hazard were replaced in the second half of Belgium’s 1-0 victory over Portugal on Sunday in the round of 16 of the European Championship.

De Bruyne asked to be substituted because of an injury after being tackled from behind by Portugal’s João Palhinha earlier in the game. He slowly walked off the field with a slight limp.

The injury occurred when Joao Palhinha lunged in from behind and trapped the ankle of De Bruyne under his leg as he continued to stride forward. De Bruyne’s left ankle could easily be seen rolling inward on slow-motion replay.

De Bruyne sat down pointing to his left ankle and shook his head. He seemed fine after he first picked up the injury during the first half, but he was not able to continue after only two minutes into the second half.

Belgium’s injury issues then worsened minutes from full-time when Hazard was taken off with an apparent hamstring injury after pulling out of a challenge and asking for a sub on the near touchline.

“We will take 48 hours now to assess the situation of the two players. We go back to Belgium now and they will have scans on the injuries tomorrow,” Belgium boss Roberto Martinez said at his post-match news conference.

“It’s too early to say how they are doing. With Kevin, it’s the ankle — he couldn’t really turn in the second half. With Eden it’s the muscle, but we have to wait for a diagnosis.”

Both players were injured before the start of the tournament but had recovered well to help Belgium finish top of their group and remain vital to the team’s hopes of advancing at Euro 2020.

Belgium will next play Italy in the quarterfinals on Friday, July 2.