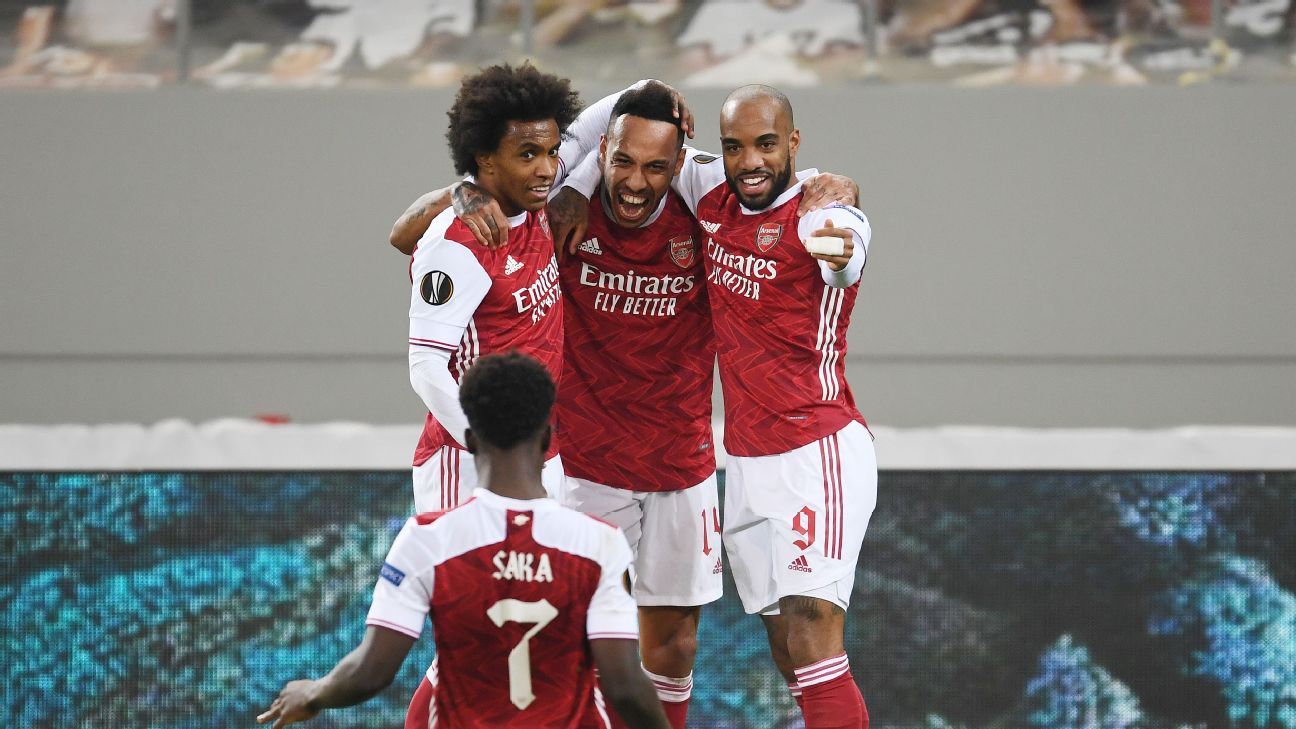 Pierre-Emerick Aubameyang struck a late winner as Arsenal dug deep to defeated Benfica 3-2 on the night and 4-3 on aggregate to reach the last 16 of the Europa League on Thursday.

When a dreadful mistake by Dani Ceballos just past the hour mark permitted Rafa Silva to put Benfica 2-1 ahead in Athens it meant Arsenal required two goals to avoid a disappointing exit.

But Kieran Tierney’s goal gave Arsenal hope and Aubameyang, who had put the English side ahead in the first half, was in the right place to head home from close range in the 87th minute.

There was still a nervous moment in stoppage time as Benfica hit the woodwork but Arsenal hung on to complete a notable victory.

“I think everyone is happy tonight. This is what gives me power every day,” said Aubameyang, who missed a hatful of chances in the first leg, played in Rome, which ended 1-1.

“The team showed character. We deserved the win.”

Travel restrictions caused by the COVID-19 pandemic meant Benfica’s home leg last week was played in the Stadio Olimpico and Arsenal were forced to play their home leg at the home of Greek club Olympiakos.

But they made light of the strange circumstances and were in a position of strength in the 21st minute when Aubameyang was played in by Bukayo Saka’s brilliant reverse pass and he calmly dinked a finish over Helton Leite.

But everything started to go wrong shortly before half-time when Benfica were awarded a free kick just outside the penalty area and up stepped Diogo Goncalvez to curl the ball into the top corner, giving Bernd Leno no chance.

Arsenal did all the pressing in the second half and thought they had regained the lead with another fine finish by Aubameyang but he was ruled marginally offside.

Calamity struck for the Gunners in the 61st minute when a hoof forward by Benfica keeper Leite was met by Arsenal midfielder Ceballos but he nodded it straight into the path of Silva who rounded Leno to walk the ball into the empty goal for a crucial away goal.

It was a hammer blow for Arsenal who suddenly found themselves needing to score twice but they responded quickly when left back Tierney combined with Willian before rifling a shot past Leite.

There were still more than 20 minutes left but Benfica calmly ran down the clock and looked on the verge of advancing when Saka, Arsenal’s most dangerous player, delivered a pinpoint cross that gave Aubameyang the simplest of finishes.