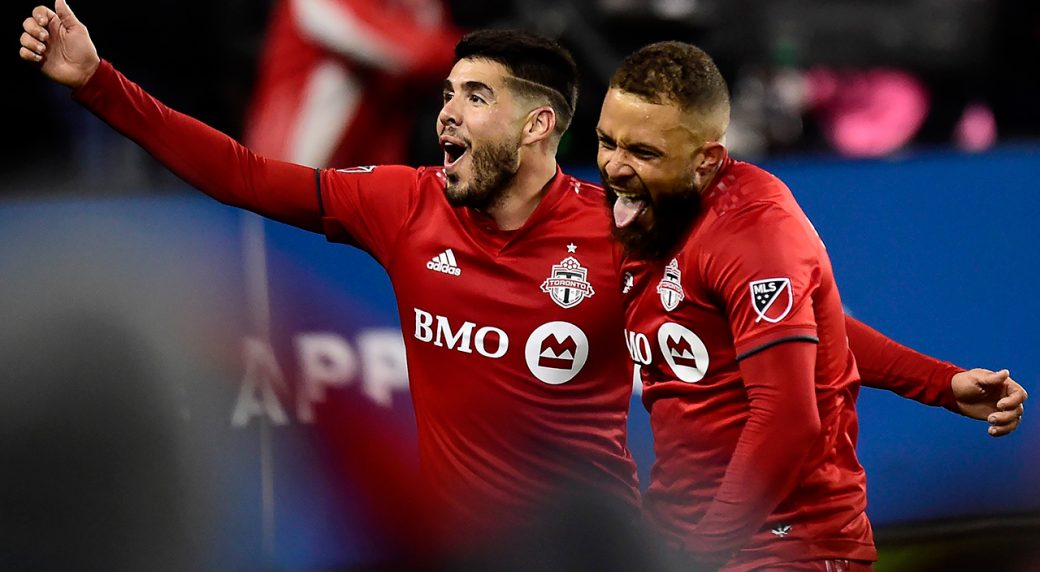 A game lacking in drama for 90 minutes came alive in stoppage time Sunday with league-leading Toronto FC clinching a playoff spot after hanging on for a 1-0 victory over slumping FC Cincinnati.

In recording its fifth consecutive victory, Toronto (11-2-4) had to survive a 94th-minute penalty call by referee Robert Sibiga who judged Omar Gonzalez had pushed substitute Allan Cruz to the ground as a cross dropped into the Toronto penalty box. Sibiga pointed to the penalty spot but changed the call in the 96th minute after video review

Toronto coach Greg Vanney thought justice was done, saying Gonzalez had position and Cruz backed into him. “That shouldn’t be a foul on us,” he stated. “But it was a little fuzzy there for a few minutes, for sure.”

Cincinnati coach Jaap Stam was not happy with the penalty reversal, noting Sibiga was 10 yards from the play and had a good view.

“If it was for like one of the big teams in the league, they would have had a penalty,” he said. “But for some reason we don’t get it. And I think it was [a penalty]. So It’s a strange decision.”

Seconds after the penalty reversal, Toronto substitute Laurent Ciman almost sent a long back pass into his own goal, a play Vanney dismissed as “nonsense.”

“We should have had more out of this game unfortunately,” said Stam. “But that’s the position where we are now. We need to make our own luck. We need to work hard for it. Nobody’s going to give it to us.”

The game was filled with rare moments of excitement and few opportunities, but still produced another three points for TFC, who, with the victory, became the first club to book its post-season ticket.

Patrick Mullins broke the deadlock in the 29th minute after Richie Laryea squared the ball back from the byline through a mass of bodies. Mullins, with the game’s first shot on target, beat goalkeeper Przemys┼éaw Tyton with a right-footed shot for his first league goal since a 5-1 win in Cincinnati on Sept. 7, 2019. Alejandro Pozuelo picked up his 10th assist of the season on the play.

In only his second start of the season, Mullins showed his predatory skills in finding the space in the crowded box needed to get the shot off.