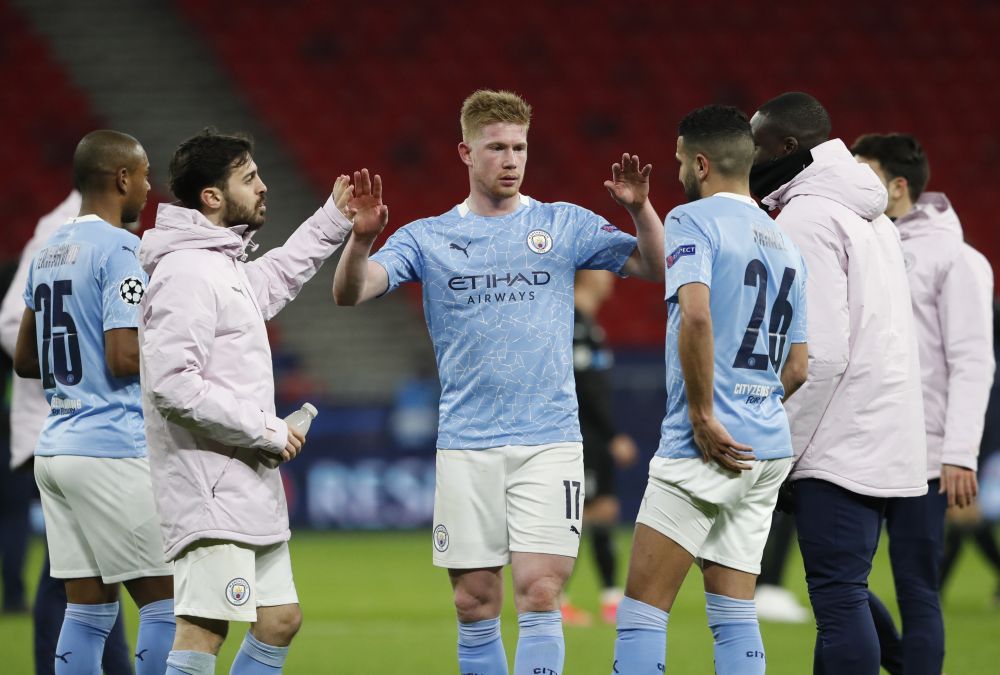 Manchester City marched into the quarterfinals of the Champions League for the fourth consecutive season after a 2-0 victory over Borussia Monchengladbach on Tuesday that completed a 4-0 aggregate triumph.

First-half goals from Kevin De Bruyne and Ilkay Gundogan secured a comfortable victory in another impressive display from Pep Guardiola’s side in the home leg, at the Puskas Arena in Budapest, the same venue as the first-leg, due to COVID-19 travel restrictions.

De Bruyne blasted City ahead in the 12th minute with an unstoppable left-footed drive into the top corner after being set up by Riyad Mahrez — the team’s 100th goal in all competitions so far this season.

The in-form Gundogan put the tie beyond any doubt with a confident finish after Phil Foden had broken from midfield at pace and then found the German with a perfectly weighted pass.

City, who have not conceded a goal since the opening game of the group stage in October, were in total command and playing at their fluent best.

De Bruyne was a constant threat, Foden a livewire and Bernardo Silva effective, often in the “false nine” role with Guardiola leaving Sergio Aguero, Gabriel Jesus and Raheem Sterling on the bench.

Gladbach, who started their Champions League campaign with such promise, have hit an awful run of form since coach Marco Rose pronounced he would leave the club to join Borussia Dortmund at the end of the campaign and this was their seventh consecutive loss in all competitions.

City should have made the result even more emphatic after the break with Mahrez missing several opportunities but the Premier League leaders were able to ease off and make changes with the outcome long determined.

“It was a good performance, in control for the 90 minutes. We moved the ball quick, played really well again. A lot of players with quality who don’t lose the ball. I am delighted to be in the next stage,” said Guardiola.

City, who have won 24 of their last 25 matches on all fronts, have fallen at the last eight in each of their three appearances at that stage under the Spanish coach.

The club have reached the last four only once, in 2015-16 under Chilean Manuel Pellegrini. The draw for the rest of the competition is held on Friday.