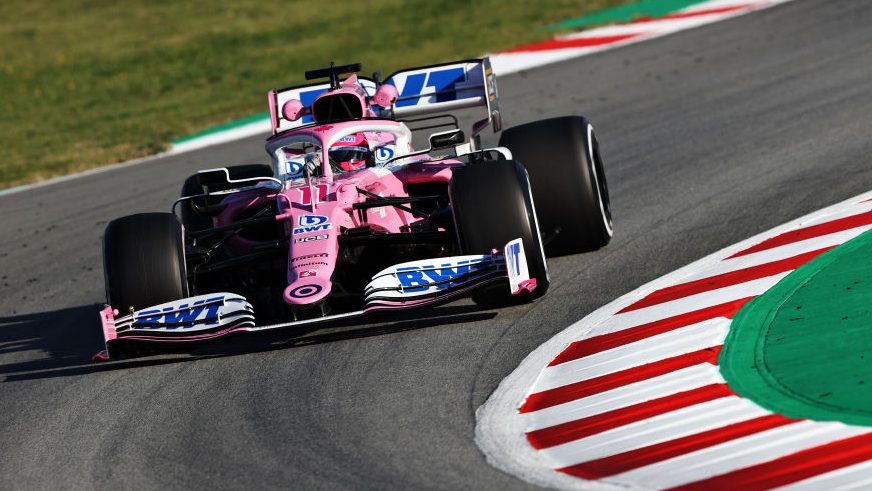 Kimi Raikkonen put Alfa Romeo on top of F1’s second day of testing as 2020’s expected frontrunners took a back seat on the timesheet.

But Mercedes, Day One’s pacesetters, still made the biggest headlines of Thursday by debuting an innovative steering wheel concept which proved the talk of the paddock.

Racing Point’s Sergio Perez had led the timesheet for most of the day but he was grabbed late on by Raikkonen, who completed some short bursts on Pirelli’s fastest C5 tyre.

The veteran Finn’s lap of 1:17.091 is the second fastest of the week so far behind Mercedes’ Lewis Hamilton. Raikkonen stopped on track late on to bring up 2020’s first red flag.

Hamilton and Valtteri Bottas again shared running at Mercedes, with the world champion clocking a mammoth 106 laps in the morning alone before his team-mate took over the W11 in the afternoon.

Bottas’ session ended after 77 laps when an electrical anomaly cost the world champions the closing stages of the day.

Daniel Ricciardo was third for Renault despite a few delays, ahead of Red Bull’s Alex Albon, AlphaTauri’s Pierre Gasly and Ferrari’s Sebastian Vettel, who returned to action after feeling unwell on Day One.

Charles Leclerc had continued in the SF1000 during the morning before Vettel took over after lunch, with the four-time champion posting their quickest time so far of 1:18.154.

“It’s not about the times for Ferrari, they want to run through all the set-up changes on the new car as has a wider set-up window to play with,” said Sky F1’s Ted Kravitz.

The emergence of what they are calling DAS – Dual Axis Steering – appears to allow their drivers to ‘toe-in’ their front wheels down the straights by moving the steering wheel towards them in the cockpit.

“DAS is the big technical innovation of the week along with their rear suspension,” suggested Kravitz.