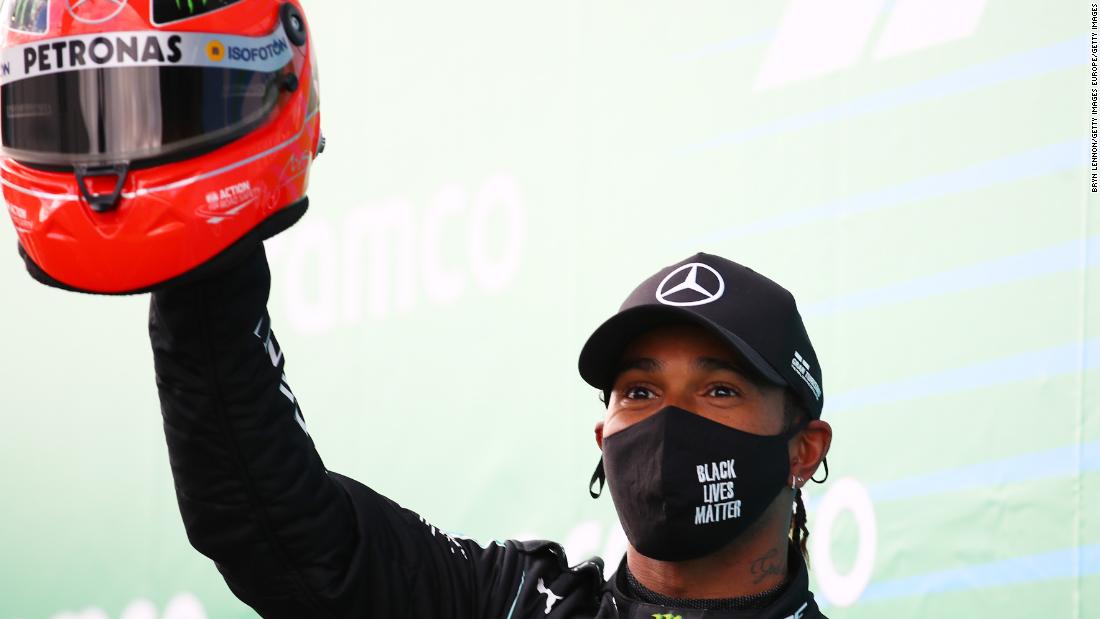 Lewis Hamilton moved level with Michael Schumacher’s record of 91 Formula One victories with a triumph at the Eifel Grand Prix in Nurburg, Germany, on Sunday.

After the race, Hamilton was presented with one of Schumacher’s famous red race helmets by the seven-time world champion’s son, Mick.

Asked what the gesture and the record meant to him, Hamilton replied: “I don’t even know what to say. “When you grow up watching someone, generally idolized them, in terms of the quality of driver they are but also what they’re able to continuously do year on year, race on race, week on week, with their team.

“I don’t think anyone, especially me, thought I’d be anywhere near Michael in terms of records. It’s an incredible honor and it’s going to take some time to get used to. Honestly, as I came into the pit lane that’s only when I realized, I hadn’t even computed it when I crossed the line. I couldn’t have done it without this incredible team pushing behind me and giving it their everything.

“A very big thank you and a huge respect to Michael.”

By way of comparison, Hamilton reached his current tally on his 261st F1 race start.

The pair are comfortably clear of the next drivers in the record books. After Hamilton and Schumacher, the next drivers on the all-time winners list are Sebastian Vettel (53), Alain Prost (51), Ayrton Senna (41), Fernando Alonso (32), Nigel Mansell (31), Jackie Stewart (27), Jim Clark, Niki Lauda (both 25) and Juan Manuel Fangio (24).

Hamilton is also on course to claim a seventh world championship this campaign, which would move him level with the only remaining significant record in Schumacher’s name.