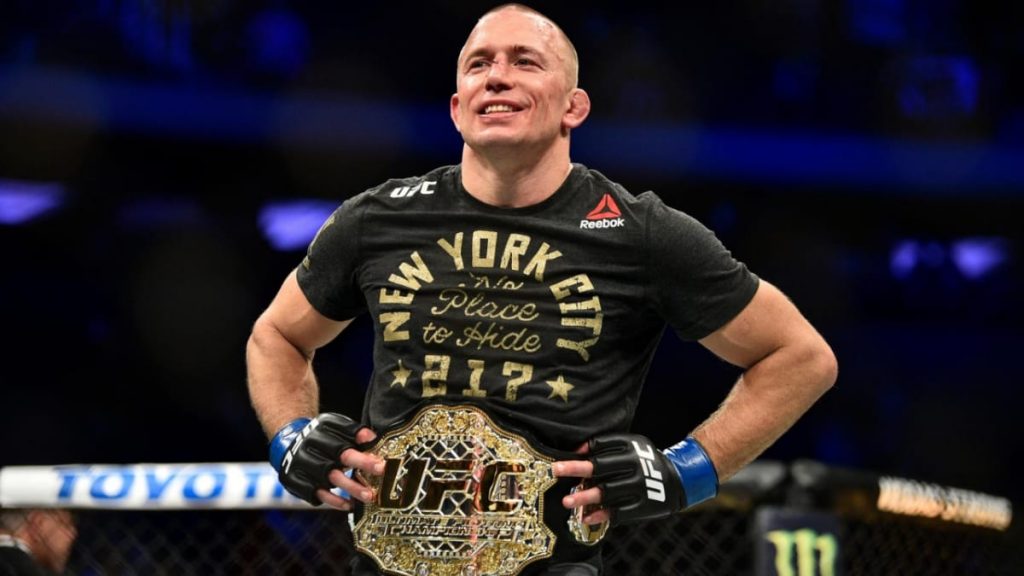 At 39, former UFC champion Georges St-Pierre still looks like he just walked off the cover of a fitness magazine.

And the competitive juices still flow, despite the fact the native of St-Isidore, Que., officially retired in February 2019 and has fought just once in seven years.

“If you ask me in the middle of training, I’ll be like ‘Hell yeah, bring it on. I’ll do it,”‘ St-Pierre, who last fought in November 2017, said of a return to action. “Then after I go home, I’m like ‘I’m too old for this.’ Going back into a drama and stuff, it will be a lot of things to consider — the weight class, where is it, when is it?”

Plus St-Pierre, whose induction into the UFC Hall of Fame was informed in May, is not one to think small.

“For a fighter and a guy like me the most exciting thing to do, it’s also the scariest thing to do,” he said. “It’s to face someone who seems invincible, someone who’s never been beaten — to have a challenge that everybody, even your friends, even your entourage tells you ‘Hey you shouldn’t do it. You can’t do it. It’s impossible.’ “That’s what drives me. That’s what gives me the itch to come back,” he added. “But the chances are very, very small.”

That explains the interest in undefeated former lightweight champion Khabib (The Eagle) Nurmagomedov. St-Pierre says they were unable to make the fight and, with both men retired, the window appears closed.

Quoting “The Art of War” by Sun Tzu, St-Pierre says knowing the field of battle is all-important. Unable to train properly or fly in training partners because of pandemic-related restrictions, he says he could be at a disadvantage compared to a possible opponent.

St-Pierre (26-2-0) also says he no longer wants to waste energy thinking about things that may not happen. Not to mention he already has plenty on his plate.

The MMA icon added to his healthy list of sponsors on Wednesday with news of a deal with Budweiser Zero. The campaign, which also features former NHLer Paul Bissonnette, entails “setting bold goals and making smart choices” for 2021.

For St-Pierre, it’s a partnership that’s a perfect fit.

“I don’t drink often but when I do drink to celebrate, I drink a lot,” he said with a laugh. “That’s one of the reasons it’s good — it’s no alcohol and no sugar so it’s more healthy and it tastes good.”

“I try to do the best thing I can, according to the resources available that we have now to stay healthy. It’s my job to train,” he said.