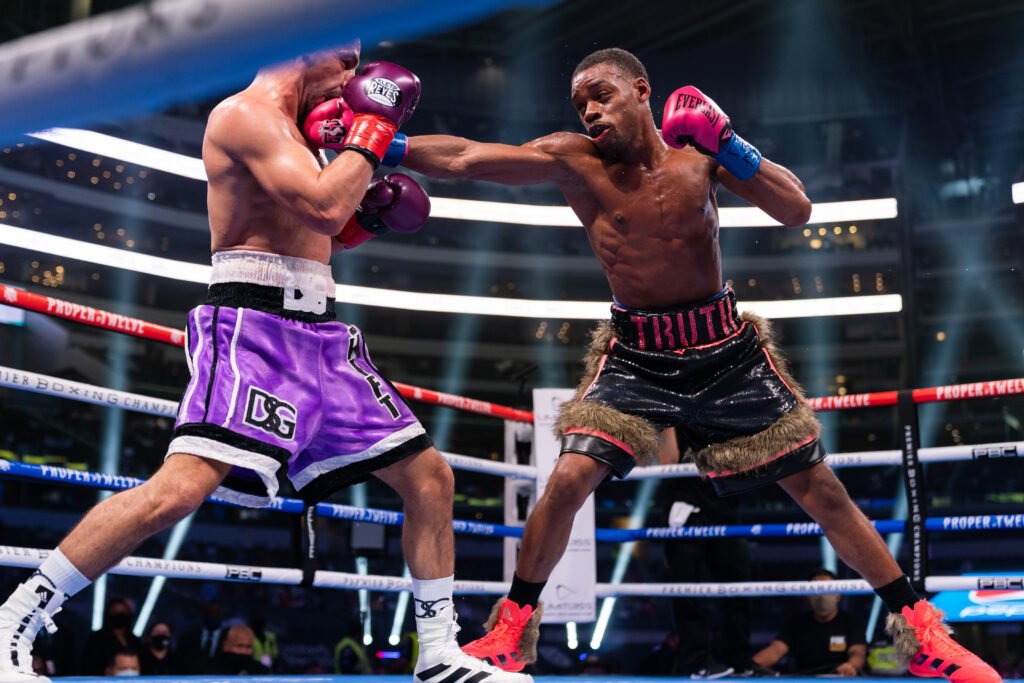 Errol Spence Jr. insisted he was still the same fighter despite a severe car accident nearly 14 months ago.

Any skepticism surrounding that claim disappeared on Saturday night at AT&T Stadium in Arlington, Texas. Spence had no problems versus Danny Garcia and won by unanimous decision, 116-112, 116-112, 117-111.

Spence kept his IBF and WBC welterweight title belts with the triumph. After months of speculation about Spence’s condition as a top fighter, he had no major issues against the former champion.

In fact, Spence was grinning even before he outpointed Garcia in his first fight since September 2019. “I was smiling because it was a long, long road to come back,” said Spence, who lives in South Dallas. “It was a lot of sacrifice and buckling down and staying focused and trials and tribulations to get to this point tonight. I got to that point, and it paid off.”

Spence’s (27-0, 21 KOs) jab dictated the entire fight. He used it to apply pressure on Garcia, who stuck with the counterpunching style he has used throughout his career. By the middle rounds, Spence’s southpaw jab caused Garcia’s left eye to swell.

In the postfight news conference, Spence stated fighting behind the jab was “common sense” because of his height and reach advantage over Garcia.

“I always had a great jab, so that’s what we were working on,” Spence said. “We were working on using the jab, setting everything up with the jab and basically just outpointing him.”

Garcia, known for his power, was unable to hurt Spence and truly check his chin aside from a punch that landed after the bell in one of the early rounds.

Garcia (36-3, 21 KOs) was pressed by his father and trainer, Angel, to stop giving Spence too much respect in the ring and throw punches when in range.

Garcia said Spence’s jab was effective because of its timing and power. He said he tried to get around Spence’s jab to throw some body shots, but it was to no avail.

During the news conference, the issue of Spence’s jab caused a bit of consternation between Garcia and his father in one exchange between them.

Inactivity inside the ring was one of Angel Garcia’s main talking points after the fight. He repeatedly lamented his son’s lack of punches as he tried to find a big right hand over the top to hurt Spence.

Spence said he was never hurt and never fully felt Garcia’s power. Because of all the sparring he did in training camp, Spence said he felt he was ready to take his first punch since his one-car accident in 2019 that left him hospitalized in critical condition and ultimately led to a misdemeanor charge of driving while intoxicated that is still pending.

WBO welterweight champion Terence Crawford was one of several fighters who were in attendance. For years, many have clamored for Spence, who fights under the Premier Boxing Champions umbrella, to fight Crawford, who is promoted by rival Top Rank.

Spence said he had no interest in talking about a potential showdown against Crawford or Saul “Canelo” Alvarez, who is fighting at super middleweight on Dec. 19 against Callum Smith.