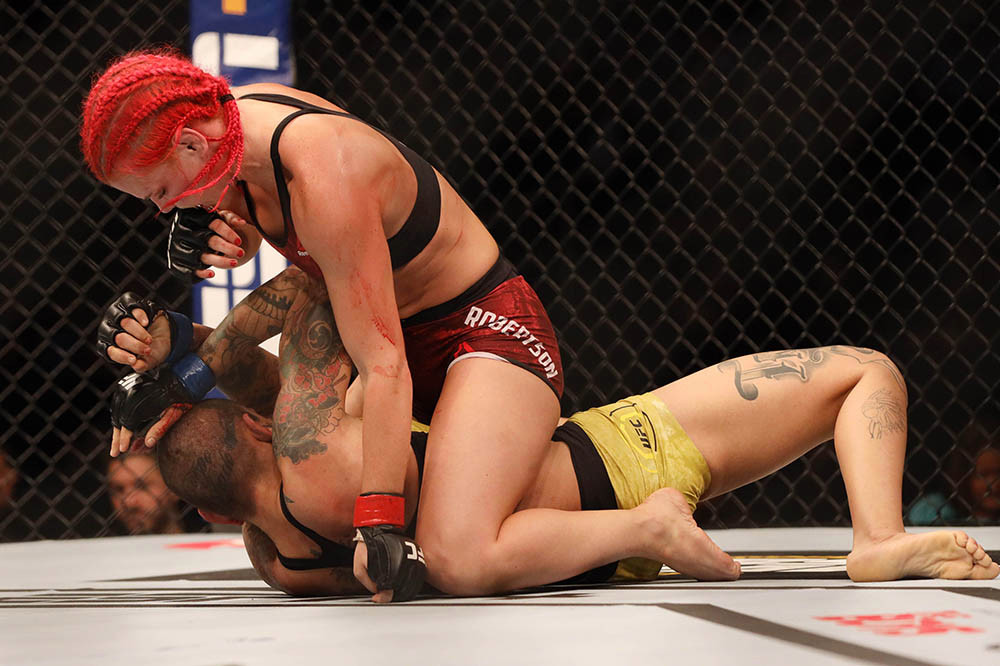 Robertson used a superior ground game to control her fight, ending it off with a rear-naked choke with 28 seconds remaining.

“I wanted to be able to display my ground and pound a little bit more but the last 30 seconds I heard (coach) Din (Thomas) say ‘It’s not too late for a finish’ so I just went for the kill,” said Robertson

Robertson (8-4-0 including 5-3-0 in the UFC) took Casey down a minute into the first round and worked into side control. The Canadian landed only a few strikes but was in control virtually all the round.

Casey (9-8-0) landed some blows to open the second round but was quickly taken down again by Robertson at the fence. The rest of the round was a repeat of the first with Robertson in control and looking for a submission.

Casey tried to keep the fight on the feet in the third but was taken down again less than two minutes in and Robertson finally locked in a choke to force Casey to tap.

It marked the first time in seven UFC fights that Robertson had gone into the third round.

Robertson, a native of Niagara Falls, Ont., who fights out of Coconut Creek, Fla., was initially slated to fight June 20 in Saskatoon but the card was called off due to the global pandemic.

She was coming off a TKO loss to Maycee (The Future) Barber last October but has now won three of her last four.

Casey, at five foot seven, had a two-inch height and four-inch reach advantage.

Barriault and Piechota both came out swinging with the Canadian pushing the action, scoring with some uppercuts late in the first round.

Piechota (12-3-1) scored with some counter punches in the second but was taken down two minutes in. The Pole fought his way back to his feet but Barriault (12-4-0) hurt him at the fence, knocked him down and kept punching until the referee stepped with 10 seconds left in the round.

“I like thrown bombs, I like to mix things up,” said Barriault, a former two-division champion in the Canadian TKO promotion. “Here I am.”

“Tonight you saw the real Power Bar,” added Barriault, who was also booked originally to fight in Saskatoon.