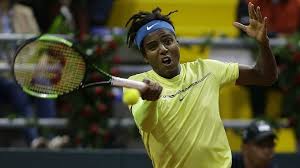 Before any matches were played, Elias Ymer didn’t hesitate to say Sweden could succeed at the Davis Cup Finals despite being one of the lowest-ranked nations in the competition.

He backed up his words with a great opening win on Thursday, then cheered on his brother Mikael in the other singles match that clinched Sweden’s victory over 2019 runner-up Canada in Group B.

Croatia also won on the opening day, while defending champion Spain was left without one of its biggest attractions after 18-year-old Carlos Alcaraz tested positive for the coronavirus and had to be dropped from the squad. Spain was set to open play against Ecuador on Friday in Group A.

“It’s a miracle. You don’t see it in almost any other country. It’s not in many sports, two brothers,” Elias Ymer said. “Our parents immigrated from Ethiopia. We’re both like No. 1 and No. 2, representing Sweden in the biggest tennis event in the world. You don’t see it so often.”

Elias Ymer, ranked 171st, rallied after being down 4-1 in the first set against Diaz. Mikael Ymer, ranked 93rd and two years younger than Elias, converted his two break-point opportunities against Pospisil.

Mikael Ymer said their wins will surely resonate back home.

“Growing up it was also one of the big dream for my dad,” he said. “Even though I don’t think too much of it while I’m playing or during the week, for me it’s more about the team and the country. Of course, there are moments here and there that I sit and I think that it’s beautiful, it’s a beautiful story.”

In the doubles match, Andre Goransson and Robert Lindstedt defeated Pospisil and Brayden Schnur 7-6 (5), 6-4 to give the Swedes all three points.

Sweden is 14th in the Davis Cup rankings and is making its first appearance in the revamped competition. It is trying to reach the Davis Cup quarterfinals for the first time since 2011.

“I said (we could win this) because I think belief is super important. It’s something everyone has to work on,” Elias Ymer said. “I said it because, yeah, if I don’t believe that we cannot win this, why should we even be here?”

Sixth-ranked Canada lost to host Spain in the final of the event’s first edition, when Pospisil was one of its key players.

The second edition of the Davis Cup Finals got underway with two other ties being played simultaneously in Austria and Italy.