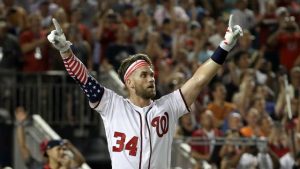 Brewers slugger and reigning NL MVP Christian Yelich will not participate in the 2019 Home Run Derby. Yelich, who is not in Milwaukee’s lineup Sunday, will skip the event with a back injury, MLB announced. Athletics third baseman Matt Chapman will take his place.
Prior to Sunday’s game Brewers manager Craig Counsell told reporters, including MLB.com’s Adam McCalvy, that Yelich had reached his “red line” and needed a break.
Yelich has missed several games throughout this season with back tightness, though Counsell did not say the back was the reason for Sunday’s off-day. His 31 home runs and .707 slugging percentage lead baseball.
Check BetRegal.com and find the best online betting site.
As for Chapman, the slugger went into Sunday hitting .265/.353/.534 with 21 home runs in 89 games this season. Those 21 homers are tied for sixth in the big leagues. Chapman will be the first A’s player to take part in the Home Run Derby since Josh Donaldson in 2014.
Ronald Acuna Jr., Pete Alonso, Josh Bell, Alex Bregman, Vladimir Guerrero Jr., Joc Pederson, and Carlos Santana round out this year’s Home Run Derby Field. The Home Run Derby will take place Monday night at Cleveland’s Progressive Field.
Yelich was also voted a starter for Tuesday’s All-Star Game. He plans on playing in that game.
“I’d still like to try and play,” Yelich said. “I think I’ll be able to. It’s just I didn’t think I was going to be able do that kind of volume of swings and what the derby demanded. If I wasn’t going to be able to perform how I was supposed to and do it justice and give it the effort that it deserved, I didn’t think it’d be a great idea to do it.”
Get all the latest Betting and Sport News updates on your social media outlets. Find us on both Facebook and Google+
Milwaukee manager Craig Counsell said the team is not expecting Yelich to miss any time after the break. He has the club’s approval to play on Tuesday.