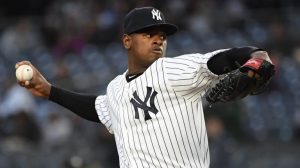 New York Yankees pitcher Luis Severino still feels “a little pain” in his right shoulder, but he is optimistic that “it’s nothing bad,” he said Wednesday.
“My strength is the same,” said Severino, who suffered a shoulder injury minutes before a scheduled start against the Atlanta Braves on Tuesday. “I feel like something pulled.”
An MRI late Tuesday afternoon revealed that Severino had right shoulder inflammation. It apparently set in after Severino threw a slider while throwing warm-up pitches at George M. Steinbrenner Field.
Severino said he didn’t throw another pitch after he felt the twinge.
This was the first time Severino has experienced pain after throwing a slider. He went through a simulation game on a back field last Thursday and made it through with no issues, he said.
Check BetRegal.com and find the best online betting site.
Because of the injury, manager Aaron Boone said Severino would be shut down for the next two weeks. Severino will take a cycle of anti-inflammatory medication as he rests his shoulder.
“Hopefully it’s as short as necessary, but we need to make sure we give it the time also that’s necessary,” general manager Brian Cashman said Wednesday. “He’s an important piece and we’re not going to have him for a period of time.
“We’ll adjust. That’s what everybody has to do. But it’s obviously a very concerning situation until he’s on the mound for a consistent amount of time to the point that you forget it ever happened.”
Cashman said Severino was due to receive a cortisone shot at some point Wednesday.
The Yankees hope Severino will be able to resume a throwing program after his two-week break. Boone said it was “highly unlikely” that Severino would start Opening Day as had been planned.
Get all the latest Betting and Sport News updates on your social media outlets. Find us on both Facebook and Google+
Until Severino returns, the Yankees plan to keep using the pitchers they currently have. Young pitchers Domingo German, Jonathan Loaisiga and Luis Cessa would contribute to that depth in the interim.