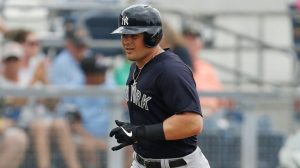 Greg Bird’s lengthy injury history with the Yankees continued on Tuesday as the first baseman was placed on the 10-day injured list with a left plantar fascia tear, retroactive to Sunday.
In corresponding moves, first baseman Mike Ford was selected from Triple-A Scranton/Wilkes-Barre and signed to a Major League contract. Outfielder Jacoby Ellsbury was transferred to the 60-day injured list to create 40-man roster space for Ford, who has been swinging a hot bat for the Yankees’ top farm affiliate.
“It’s a matter of just waiting my turn,” Ford told The Scranton (Pa.) Times-Tribune on Tuesday. “This is where I’ve always wanted to be. It’s the team I rooted for growing up. It’s pretty crazy. It kind of came full circle.”
Splitting playing time at first base with Luke Voit, Bird was off to a slow start, batting .171/.293/.257 with one homer in 10 games.
Check BetRegal.com and find the best online betting site.
Once regarded as the most complete hitter in the Yankees’ farm system — rated higher than Gary Sanchez, Aaron Judge and others — the 26-year-old Bird has been set back by repeated injuries.
After making his big league debut in August 2015, Bird sustained a right labrum tear that forced him to miss all of ‘16 and a right ankle injury that required surgery in May 2017. Bird had another right ankle procedure in March 2018 that cost him the first 48 games of the season.
Ford, 26, earned his opportunity with a sizzling start to his campaign at Triple-A. Through 10 games for the RailRiders, Ford was batting .410/.467/.897 with four doubles, five homers and 14 RBIs.
The Princeton University product was signed by the Yankees as a non-drafted free agent in July 2013 and was selected by the Mariners in the 2017 Rule 5 Draft, but he was returned to New York three months later.
Get all the latest Betting and Sport News updates on your social media outlets. Find us on both Facebook and Google+
“The opportunity in Seattle didn’t really work out, and now maybe something better does with a little bit more patience and a little bit more time,” Ford said.