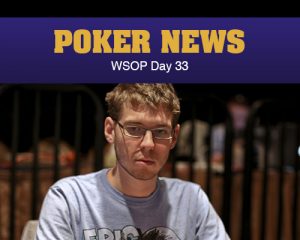 Find your daily dose of articles with our online poker news!
Day 33 of the 2016 World Series of Poker featured two bracelets won, including one by a former online poker star. The $50,000 Poker Players Championship continued to play but remains in the early stages, while the Crazy Eights event is near the finish line.

Andrew Lichtenberger won his first World Series of Poker bracelet in the 2016 WSOP Event #52: $3000 No-Limit Hold’em on Sunday.
“It feels amazing to win,” Lichtenberger said. “I’ve been playing the World Series since 2009 and I’ve been watching it since I was a kid when I saw Chris Moneymaker win, so it feels amazing.”
Lichtenberger ultimately outlasted a field of 1,125 players to book the win, including beating AussieCraig Blight heads-up on a fourth day added to the event. He collected $569,158 for the victory, pushing his career earnings up to $8,279,017, including $2,874,243 at the WSOP alone
If you want to learn more about poker, don’t forget to visit our How to play section!
$3,000 No-Limit Hold’em Final Table Results

Allan Le Crowned Omaha 8 King
Huntington Beach, California pro Allan Le won the 2016 WSOP $1,500 Mixed Pot-Limit Omaha 8/Omaha 8/Big O event on Sunday.
Le captured his first WSOP bracelet and $189,223 in first-place money. Le is youngest of three professional poker playing brothers, including Nam Le and Tommy Le, and the first to win at the WSOP.
This first-time event at the WSOP drew 668 entrants and played down to just five players remaining after three days. Top Canadian pro Gavin Smith came into the event’s added fourth day with the chip lead, but could not hold on, with Le bulldozing his was to heads-up with Phillip Elrisch, holding a lead that proved to be insurmountable.
Ready for start winning at poker? Bet NOW!
$1,500 Mixed Omaha 8 Final Table Results

Michael Mizrachi’s already won the $50,000 Poker Players Championship twice, and he might be dreaming of a third Chip Reese Memorial Trophy after bagging the second-place stack at the end of Day 2 of this year’s event.
Mizrachi won the event in 2010 for $1,559,046 and then did so again in 2012 for $1,451,527. He now trails only Justin Bonomo. Here are the top 10 chip stacks:

Still, it’s early in the tournament, as Day 2 was just the second of five scheduled days. The slow structure and deep starting stacks mean still nearly half of the field remains, as 42 out of 91 players still have chips.
Obviously, tons of big names make up those 42. David Grey, Daniel Negreanu, Mike Gorodinsky, Jason Mercier, Scott Seiver, Howard Lederer, Paul Volpe, Phil Hellmuth, and George Danzer are all still in contention. Gorodinsky won last year’s event, topping 84 players for $1,270,086.
Some of the notables who busted out include John Hennigan, Joe Hachem, Erik Seidel, Bryn Kenney, Dzmitry Urbanovich, Brian Hastings, and the red-hot Benny Glaser.