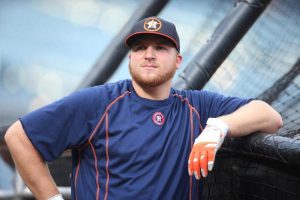 The White Sox claimed first baseman A.J. Reed off waivers from the Astros on Monday. The addition comes six days after Houston designated the 25-year-old for assignment, which gave the club up to seven days to complete a trade or place the player on irrevocable outright waivers.
Reed, a second-round pick in the 2014 MLB Draft, has spent most of the last four seasons playing for the Astros’ Class AAA affiliate in Round Rock. He’s only sparingly played at the big league level, the longest stint coming three years ago when he batted .164 with three home runs in 45 games.
The Sox have already assigned him to their Class AAA affiliate in Charlotte.
Entering the 2016 season, Reed was widely considered one of the top hitting prospects in the game. Baseball America, MLB Pipeline and Baseball Prospectus each included him in their top 100 lists. BA was especially bullish, ranking him 11th after a 2015 season in which he batted .340/.432/.612 across two levels.
Check BetRegal.com and find the best online betting site.
Reed’s progress stopped right around that time, however. Not only has the first baseman been stuck at Class AAA, but his numbers have consistently decreased over the last four years. His on-base plus slugging percentage with Round Rock has fallen from .924 in 2016 to just .798 this year.
The White Sox will be hoping that a change of scenery will do Reed some good given the potential he showed in the past. It’s only three years ago that prospect evaluators widely considered him a strong talent, with some reserving the opinion that he was one of the top prospects in the game.
Get all the latest Betting and Sport News updates on your social media outlets. Find us on both Facebook and Google+
To clear room on the 40-man roster, the White Sox transferred pitcher Ryan Burr to the 60-day injured list.