What is Dead Money? 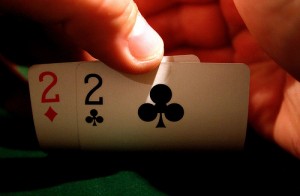 Check Regal Poker for Latest Poker News, poker strategy tips and more
“Dead money” is money that a player is required to put into the pot, but does not count toward fulfilling that player’s bet obligation. This most commonly occurs when a player has missed their blinds. When a player misses their blinds, they have two choices. They can either sit out until it is their turn to take their big blind again, or they can post the owed blinds on a subsequent hand. If they choose to post rather than wait, they will have to post all owed blinds. This usually consists of a big blind and a small blind, but can vary depending upon the blind structure of the game. Usually, when a player makes up multiple blinds by posting, the big blind is considered “live,” and the small blind is considered “dead.” This means that the big blind is credited toward the amount required to call on the first betting round, but the small blind is not. Because of this, you will often see the dealer leave the amount of the big blind in front of the player who posted it, indicating the betting credit, but take the “dead” small blind into the pot, or put it aside. This type of dead money is also referred to as a “dead blind.”

At Regal Poker you will find the best articles about how to play poker, visit us and check out our promotions we offer you the best online poker games.
Money contributed to a pot, game, or tournament by a player with little or no chance to win is also called “dead money.” The term can be used to describe many situations. For instance, when someone is drawing dead on a particular hand, the money that they put into the pot is considered “dead money.” In this context, it does not imply anything about the quality of the player, it simply illustrates the fact that a player is drawing dead on a particular hand. When there is dead money in the pot can often have a favorable impact on pot odds for players who are still drawing live. This is because they can now win a bigger pot than they could before the dead money went in. It is important that you try to recognize when dead money goes into the pot. It often has significant betting implications, which can alter the outcome of the hand.
Sometimes, a player with a very low level of poker skills will buy into a game where the level of competition is much higher. Because this player is seriously overmatched, and has very little chance to win in the game, his entire buyin could be considered dead money. It is a foregone conclusion that this player will leave the game broke, and all that remains to be seen is how his money will be divided up. In this context, “dead money” implies a derogatory view of another player’s playing style, and can be taken as an insult.
The term “dead money” is also used frequently in tournaments. Many players who enter a poker tournament do not have the correct strategy or skill set to perform well. They may be cash game players who have not adjusted their strategies effectively, or inexperienced tournament players prone to mistakes. In either case these players are often massive underdogs in a tournament format. Experienced, successful tournament players consider these types of entrants “dead money.” Most professional players consider the amount of dead money in most tournaments to be relatively high. This view is validated by the high proportion of professionals to amateurs who end up “in the money” of most major events. Tournament success requires a highly specialized strategy. The best tournament players are able to develop such a strategy, make necessary changes to it on the fly, and do it all without making any mistakes. This is a specialized skill which benefits the experienced player immensely.
In the later stages of many Holdem tournaments, antes are added. These antes are often considered “dead money” by players who are calculating pot odds or stealing blinds. That is because this is extra money that is in the pot every hand, but does not receive any action. Adding the antes, or “dead money” to the pot every hand really increases the incentive for everybody to steal blinds. It also increases the incentive for players to defend, and raises the amount generally required to steal successfully. This has a dramatic effect on the action for the remainder of the tournament, and requires a major adjustment on the part of the players. Many amateurs overestimate the value of their stacks after the antes have been added, and underestimate how active they need to be stealing blinds in order to keep up. When the antes are added, you need to consider the cost per round (blinds + antes), not only the cost of the blinds, when making decisions.