What are Capped Ranges? 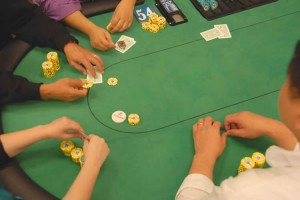 Check Regal Poker for Latest Poker News, poker strategy tips and more.
When you’re playing poker, you can obviously never know exactly what your opponent has, unless he’s kind enough to turn his cards face up for you. The best you can do is to construct a range of possible hands he could be holding, based on what he has done on each street in the hand. As we get deeper into the hand, you should be able to narrow down this range significantly, so that by the river you have a very good idea of what he may have.
At Regal Poker you will find the best articles about how to play poker, visit us and check out our promotions we offer you the best online poker games.
A capped range in no limit holdem is a situation where a player’s possible hands include no very strong holdings, based on their actions so far in the hand. The transparent lines which people take in various situations can make it quite apparent to a good player that they are very unlikely to have strong hands in their range, allowing them to bluff with the right frequency when they themselves have weak hands, and to size their value bets correctly so as to get paid off by their opponent’s weak range.
Examples of Capped Ranges
Imagine you are in the first level (25/50 blinds) of a NLHE tournament and a tight player with whom you are very familiar raises to 3 times the big blind under the gun. These ‘Harrington on Holdem’-type players will have pairs from Tens upwards and AQ and AK almost always here. Now let’s say you call on the button with a speculative hand like 89s, because you are in position 100 big blinds deep and you feel your implied odds are very good.
The flop comes down 4d5h7c and your opponent bets 300 into the 375 chip. You can immediately narrow his range down to hands that are of medium strength on this board, specifically over-pairs and continuation bets with missed broadways. You on the other hand, can have all sorts of extremely strong hands: all of the sets on the board, 45 or and maybe even 57 suited for two pair, as well as 86 suited for the nut straight.
Even though your range is un-capped where his is, you still have to make a decision on how best to take advantage of this situation. Just because his range is capped doesn’t mean that he will fold if you try to bluff him. For example, if you raise the flop here a lot of players will convince themselves that you have a weaker over-pair most of the time and happily go all-in. Against such players it will be better to wait until the turn falls and then shove over their bet on the turn.
Defending Against These Plays
If you are in a game with a player who reads hands this well and has the cojones to makes plays like this, you might do well to find another table. But if you do choose to stay, you should know how to protect yourself.
The first and best strategy is to practice avoidance. When playing with a very competent hand reader, you must go to great lengths to disguise your hands and change up your play. This will require some unconventional play, such as occasionally raising 98s in first position at a 9-handed table or checking back a set on a coordinated flop. These are risky plays, but they are safer than enabling a tricky player to eliminate strong hands from your range altogether.
You may also need to resort to game theory and refuse to fold the best hands in your range, even if they are not objectively all that strong. If you were the Villain in the second example, you might have to call down when you turn a pair of Aces. Sure, your opponent could have a stronger hand, but since you very rarely will, folding a pair of Aces is highly exploitable.
Thin Value Bets
What if your opponent reads this article or just figures out that he’s getting exploited and decides to start calling down with his strong one-pair hands? Believe it or not, you don’t need to stop bluffing him. The occasional tricky play or thin call down are just stop-gap measures that turn an insanely profitable bluff into a marginally profitable bluff. You won’t win nearly as often, but if you can stand the variance, you’ll still show a profit in the long run.
Realize also that capping your opponent’s range will enable you not only to bluff but also to make big, thin value bets. In the second example, if you know your opponent rarely or never has better than one pair, then you could take the same line with a weak two pair hand like 54 or even one strong pair such as AK. There are very few second-best hands that will pay you off, but there are also very few better hands in your opponent’s range. And if he does correctly adapt by occasionally calling down with one pair, he’ll be in for a surprise!
Poker is a battle for information. Any time that you have more information about your opponent’s hand than he has about yours, the potential for profit is there. It is simply a matter of figuring out how to make the most of it. Even many players who read hands well don’t always take full advantage of that information.
Learning to recognize when there is an upper limit on an opponent’s possible hand strength and how you can exploit it can present you with some very profitable opportunities. Hopefully it will also demonstrate the critical importance of mixing up your own play, at least when there are good hand readers at the table, so that no one is able to take advantage of you.

What is a Range Merging Player?