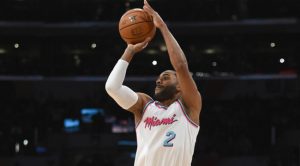 Wayne Ellington will continue to dial from long distance with the Miami Heat, with the veteran guard reaching an agreement with the team Thursday in NBA free agency, the Sun Sentinel has confirmed.
Ellington agreed to a one-year, $6.3 million contract, matching his salary from this past season. Because of the one-year term of the deal and Ellington’s status as a Bird Rights free agent next summer, his contract comes with a no-trade clause, requiring his permission for a move during the 2018-19 season.
The agreement puts the Heat $3.2 million over the punitive luxury tax on excessive NBA payrolls, which would require a $4.9 million luxury-tax payment to the league. The tax, however, is not computed until the end of a season, giving the Heat time to work back under the tax with other personnel moves. The team has stressed a desire not be in the luxury tax after the coming season, due to long-term implications.
Check BetRegal.com and find the best online betting site.
France will have had 24 hours longer to prepare for the game after edging out Belgium 1-0 in 90 minutes in Saint Petersburg on Tuesday.
With the Heat now in the luxury tax, it now limits their mid-level exception to $5.3 million.
Heat President Pat Riley said after last month’s NBA Draft that Ellington would be a priority in free agency, following up on that vow later in free agency than some expected.
“The guy’s had a great, great two years with us,” he said. “There’s no doubt that we want to keep him. We’re going to try to find a way to do that. But we’re up against the tax. I think it you add up the numbers, you know what that means. But we’re going to do everything we can do to try to keep him.”
Get all the latest Betting and Sport News updates on your social media outlets. Find us on both Facebook and Google+
Ellington, 30, is coming off a season when he converted a franchise-record 227 3-pointers, averaging a career-high 11.2 points per game. Ellington closed sixth in the NBA in 3-pointers made, an NBA record for 3-pointers scored as a reserve.