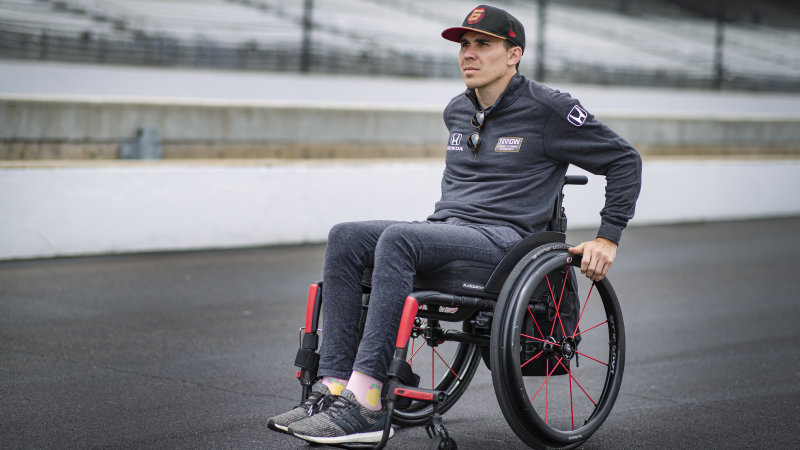 Canadian race car driver Robert Wickens is back behind the wheel, racing again versus the same drivers that he used to race against every weekend on the IndyCar circuit.

Only now he’s doing it from the basement of his Indianapolis home.

The 31-year-old, left paralyzed in a devastating 2018 racing crash, is racing using a sophisticated simulator, navigating the twisting turns of the Barber Motorsports Park in Alabama.

“It’s kind of a surreal experience, you know, for me, this is really step one to get back into the race car,” Wickens, originally from Guelph, Ont., told CBC Sports.

It was Wickens’s first taste of real competition since the crash at Pocono Speedway left him partially paralyzed and lucky to be alive. His goal has always been to race again.

When CBC Sports caught up with Wickens at his home last November, he was relearning how to walk, something doctors informed him he would never do again.

“If anyone who’s played a racing game at home or in an arcade, or if you’ve gone to one of those facilities where you can try a real racing simulator, going an hour without crashing on a simulator is very, very hard,” he stated. “And it was just very rewarding to cross the finish line.”

Both before and after his incident, Wickens used a simulator to stay sharp but says it will take some getting used to operating under real race conditions.

“The feeling is so much more different. It’s a challenge,” Wickens said. “It’s going to take a lot of patience, a lot of perseverance. But luckily we’re not really in a race against the clock to get back into a race car. “

IndyCar CEO Mark Miles stated he was initially skeptical about the idea and worried it wouldn’t translate well to television.

“It is really getting to a younger audience,” Miles said. “In my mind, it’s starkly different than what most broadcasters are having to do now, which is showing maybe cut-down old sport but not live.

“And it is so realistic. And then it’s particularly fun to see how competitive and excited the drivers are to have a chance to get out on track.”

For Wickens, it’s an opportunity to show that after all he’s been through, he can still go fast.